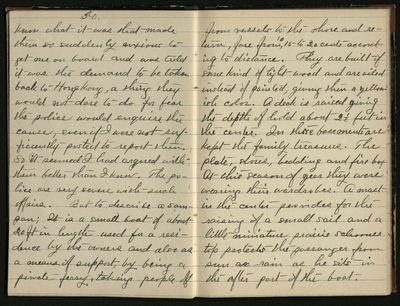 know what it was that made them so suddenly anxious to get me on board and was told it was the demand to be taken back to Hong Kong, a thing they would not dare to do for fear the police would enquire the cause, even if I were not sufficiently posted to report them. So it seemed I had argued with them better than I knew. The police are very severe with such affairs. But to describe a sampan; It is a small boat of about 20 ft in length used for a residence by the owners and also as a means of support, but being a private ferry, taking people off

from vessels to the shore and return, fare from, [10] 15 to 20 cents according to distance. They are built of some kind of light wood and are oiled instead of painted, giving them a yellowish color. A deck is raised giving the depth of hold about 2 ½ feet in the center. In these basements are kept the family treasures. The plate, stoves, bedding and fire box. At this season of year they were wearing their wardrobes. A mast in the center provides for the raising of a small sail and a little miniature prairie schooner top protects the passenger from sun or rain as he sits in the after part of the boat.