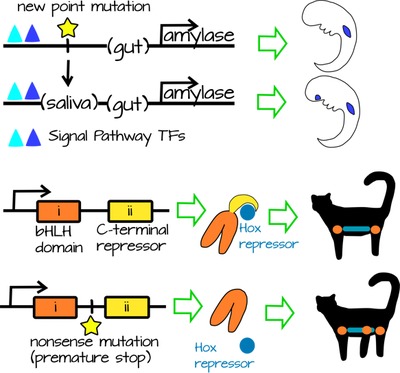 Increasing organismal complexity without increasing genomic complexity:Here, a point mutation or a deletion affects cis regulatory regions or coding regions in a way that increases the function or expression of a gene product. For example, imagine amylase (an enzyme that digests amylose starches), which is normally expressed in the small intestine. Local activators are present all over the digestive system (including the stomach, mouth, and intestines), but a switch regulated by an signalling pathway is only activated in the small intestine. A series of point mutations in the cis-regulatory regions of amylase now create a novel local activator response element. In a way, this could be seen as an increase in genomic complexity because a new binding site was added, but seen from another point of view, the overall number of nucleotides remains the same. This novel cis regulatory region turns on amylase in the mouth, so now salivary glands produce amylase and starch digestion can begin earlier, diversifying the diet of the animal. In this case, the species has maintained the number of genes and the number of nucleotides in the genome but organismal complexity has increased due to an new cis regulatorysite (figure 2).

Exonic (coding) mutations can also increase complexity, without adding genes or nucleotides to the genome. For example, imagine a mammalian protein with two domains - a functional domain and a repressor domain. The repressor domain can be ubiquitinated to inhibit the protein under particular conditions. In this case, our protein is a leg organizer. The repressor domain is bound by Hox genes of the trunk, limiting leg organizer expression to the region anterior to the thoracic and posterior to the lumbar regions of the body. Along with other limits to expression, this results in an animal with two pairs of legs. A point mutation that converted a protein-coding codon to a stop codon (a nonsense mutation), at the end of the functional domain, would result in a protein missing the repressor domain. This would cause ectopic activation of leg organizer activity and (potentially) additional legs.