Home > All Reminiscences of John Muir > 98 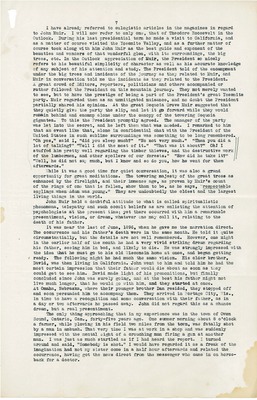 7 I have already referred to eulogistic articles in the magazines in regard to John Muir. I will now refer to only one, that of Theodore Roosevelt in the Outlook. During his last presidential term he made a visit to California, and as a matter of course visited the Yosemite Valley, and as a further matter of course took along with him John Muir as the best gaide and exponent of the beauties and wonders of that wonderful glen, with its surroundings, the big trees, etc. In the Outlook appreciation of Muir, the President so nicely refers to his beautiful simplicity of character as well as his accurate knowledge of any subject of his attention and study. The President told of the encampment under the big trees and incidents of the journey as they related to Muir, and Muir in conversation told me the incidents as they related to the President. A great crowd of Editors, reporters, politicians and others accompanied or rather followed the President on this mountain journey. They not merely wanted • to see, but to have the prestige of being a part of the President's great Yosemite party. Muir regarded them as an unmitigated nuisance, and no doubt the President partially shared his opinion. At the great Sequoia Grove Muir suggested that they quietly give the party the slip, and let it go forward while they would remain behind and encamp alone under the canopy of the towering Sequoia gigantea. To this the President promptly agreed. The manager of the party was let into the secret, and he left them what was needed. I remarked to him that an event like that, alone in confidential chat with the President of the United States in such sublime surroundings was something to be long remembered. "Oh yes," said I, "did you sleep much?" "No not very much." "Then you did a lot of talking?" "Well I did the most of it." "What was it about?" OhJ I stuffed him pretty well regarding the timber thieves, and the destructive work of the lumbermen, and other spoilers of our forests*" "How did he take it?" "Well, he did not say much, but I know and so do you, how he went for them afterwardB." While it was a good time for quiet conversation, it was also a grand opportunity for great meditations. The towering majesty of the great trees as enhanced by the firelight, and their immense age, as proven by Muir's count of the rings of one that is fallen, show them to be, as he says, "respectable saplings when Adam was young." They are undoubtedly the oldest and. the largest living things in the world. John Muir held a doubtful attitude to what is called spiritualistic phenomena, telepathy and such occult beliefs as are enlisting the attention of psychologists at the present time; yet there occurred with him a remarkable presentiment, vision, or dream, whatever one may call it, relating to the death of his father. It was near the last of June, 1896, when he gave me the narration direct. The occurrence and his father's death were in the same month. He told it quite circumstantially, but the details are not well remembered. However, one night in the earlier half of the month he had a very vivid striking dream regarding his father, seeing him in bed, and likely to die. He was strongly impressed with the idea that he must go to his old Wisconsin home at once, and began getting ready. The following night he had much the same vision. His older brother, David, was then living in California. John went to him and told him he had the most certain impression that their father would die about as soon as they could get to see him. David made light of his premonitions, but finally concluded since John was surely going, and at the best his father might not live much longer, that he would go -with him, and they started at once. At Omaha, Nebraska, where their younger brother Dan resided, they stopped off and soon persuaded him to accompany them. They arrived in Portage City, 'is., in time to have a recognition and some conversation with their father, as in a day or two afterwards he passed away. John did not regard this as a chance dream, but a real presentiment. The only thing approaching that in my experience was in the town of Owen Sound, Ontario, Can., forty-five years ago. One summer morning about 8 o'clock a farmer, while plowing in his field two miles from the town, was fatally shot by a man in ambush. That very time I was at work in a shop and was suddenly impressed with the mental sight of a crouching man firing a gun at another man. I was just as much startled as if I had heard the report. I turned around and said, "Somebody is shot." I would have regarded it as a freak of the imagination had not my sister come in a half hour afterwards and related the occurrence, having got the news direct from the messenger who came in on horseback for a doctor.