Home > All Reminiscences of John Muir > 97 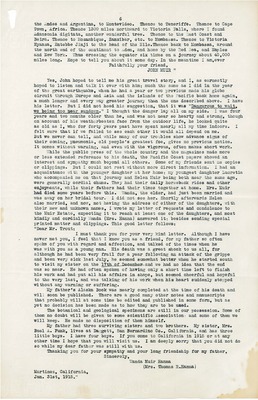 6 the xjides and Argentina, to Montevideo. Thence to Teneriffe. Thence to Cape Town, Africa. Thence 1300 miles northward to Victoria Falls, where I found Adansonia digitata, another wonderful tree. Thence to the East Coast and Beira. Thence to Mozambique, Zanzibar, etc. to Mombassa. Thence to Victoria Nyanza, Entebbe Jinji to the head of the Nile.Thence back to Mombassa, around the north end of the continent to --.den, and home by the Red Sea, and Naples and New York. Thus crossing the equator six times on a journey about 40,000 miles long. Hope to tell you about it some day. In the meantime I am,ever Faithfully your friend, JOHN MUIR " Yes, John hoped to tell me his great travel story, and I, as earnestly hoped to listen and talk it over with him; much the same as I did in the year of the great earthquake, when he had a year or two previous made his globe circuit through Europe and Asia and the islands of the Pacific back home again, a much longer and every way greater journey than the one described above. I have his letter. But I did not heed his suggestion, that it was "Dangerous to wait. we being too near sundown." I thought the danger lay all on my side. 1 was four years and two months older than he, and was not near so hearty and strong, though on account of his weatherbeaten face from the outdoor life, he looked quite as old as I, who for forty years past have spent nearly all my time indoors. I felt sure that if we failed to see each other it would all depend on me. But we never can tell, and Trtiile many of our troubles show advance signs of their coming, pneumonia, old people's greatest foe, gives no previous notice. It comes without warning, and even with the vigorous, often makes short work. While the public press of the whole country and the magazines made more or less extended reference to his death, the Pacific Coast papers showed an interest and sympathy much beyond all others. Some of my friends sent me copies or clippings. But I could not rest without more direct information. I had an acquaintance with the younger daughter at her home? my youngest daughter Lucretia who accompanied me on that journey and Helen Muir being both near the same age, were generally cordial chums. They had their daily horseback rides and other enjoyments, while their fathers had their times together at home. Mrs. Muir had died some years before this. Wanda, the elder, had just been married and was away on her bridal tour. I did not see her. Shortly afterwards Helen also married, and now, not having the address of either of the daughters, with their new and unknown names, I wrote my letter of requests and condolence to the Muir Estate, expecting it to reach at least one of the daughters, and most kindly and cordially V/anda (Mrs. Hanna) answered it: besides sending special printed matter and clippings. This good letter follows: "Dear Mr. Trout: I must thank you for your very kind letter. Although I have never met you, I feel that I know you as a friend, for my father so often spoke of you with regard and affection, and talked of the times when he was with you as a young man. His death was a great shock to us all, for although he had been very frail for a year following an attack of the grippe and been very sick last July, he seemed somewhat better when he started south to visit my sister on the 17_th_ojf,_December and we had no idea that the end was so near. He had often spoken of having only a short time left to finish his work and had put all his affairs in shape, but seemed cheerful and hopeful to the very last, and was talking of his work when hi^s heart suddenly stopped without any warning or suffering. My father's Alaska Book was nearly completed at the time of his death and will soon be published. There are a good many other notes and manuscripts that probably will at some time be edited and published in some form, but as yet no decision has been made as to how they are to be uaed. The botanical and geological specimens are still in our possession. Some of them no doubt will be given to some scientific Association- and some of them we will keep. He made no disposition of them himself. My father had three surviving sisters and two brothers. My sister, Mrs. Buel A. Funk, lives at Daggett, San Bernardino Co., California, and has three little boys. I have four boys. If you come to California in 1915 or at any other time I hope that you will visit us. I am deeply sorry that you did not do so while my dear father was still with us. Thanking you for your sympathy and your long friendship for my father, Sincerely, Wanda Muir Hanna (Mrs. Thomas R.Hanna) Martinez, California, Jan. 31st, 1915."