Home > All Reminiscences of John Muir > 96 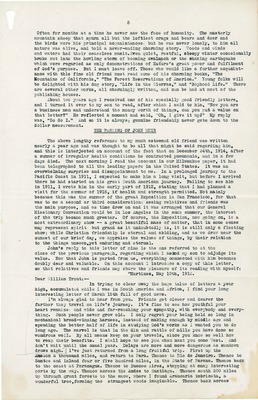 Often for months at a time he never saw the face of humanity. The masterly mountain sheep that spurn all but the loftiest crags and bears and deer and the birds were his principal acquaintances- but he was never lonely, to him all nature "was alive, and told a never-ending charming story. Woods and winds and waters had their ceaseless music.Even quiet, restful, sleepy winter occasionally broke out into the howling storm of booming avalanch or the shaking earthquake which were regarded as only demonstrations of Nature's great power and fulfilment of God's purpose. But I must leave off. Those who would like a further acquaintance with this fine old friend must read some of his charming books, "The Mountains of California," "The Forest Reservations of America." Young folks will be delighted with his dog story, "Life in the Sierras," and "Boyhood Life." There are several other works, all charmingly written, and can be had at most of the publishing houses. About two years ago I received one of his specially good friendly letters, and I turned it over to my son to read, after which I said to him, "Now you are a business man and understand the money worth of things, can you put a value on that letter?" He reflected a moment and said, n0h, I give it upj" My reply was, "So do I." And so it is always; genuine friendship never gets down to the dollar measurement. THE PASSING OF JOHN MUIR The above lengthy reference to my much esteemed old friend was written nearly a year ago and was thought to be all that might be said regarding him, and this is interjected on account of the fact that on December 24th, 1914, after a summer of irregular health conditions he contracted pneumonia, and in a few days died. The next morning I read the account in our Milwaukee paper, it had been telegraphed to all the leading papers in the United States. It was an overwhelming surprise and disappointment to me. In a prolonged journey to the Pacific Coast in 1911, I expected to make him a long visit, but before I arrived there he had started on his great South American journey. Failing to see him in 1911, I wrote him in the early part of 1912, stating that I had planned a visit for the summer of 1915, if health and strength permitted. Not mainly because this was the summer of the great Exposition in San Francisco, for that was to me a second or third consideration: seeing relatives and friends was the main purpose, and as time drew on and it was arranged that our General Missionary Convention would be in Los Angeles in the same summer, the interest of the trip became much greater. Of course, the Exposition, now going on, is a most extraordinary show — a great beautiful mass of matter, that in some sense may represent spirit but grand as it undoubtedly is, it is still only a fleeting show; while Christian friendship is eternal and abiding, and as we draw near the sunset of our brief day, we appraise the values of things, by their relation to the things unseen,yet enduring and eternal. John's reply to this letter of mine is the one referred to at the close of the previous paragraph, regarding which I asked my son to adjudge its value. Now that John is parted from us, everything connected with him becomes doubly dear and valuable. On this account I introduce a copy of this letter, so that relatives and friends may share the pleasure of its reading with myself: "Martinez, May 10th, 1912. Dear William Trout:— In trying to clear away the huge talus of letters a year high, accumulated while I was in South America and Africa, I find your long interesting letter of March 15th full of good news. I'm always glad to hear from you. Friends get closer and dearer the farther they travel on life's journey. It's fine to see how youthful your heart remains- and wide and far-reaching your sympathy, with everybody and everything. Such people never grow old. I only regret your being held so long in mechanical bread-winning harness, instead of making enough by middle age and spending the better half of life in studying God's works as I wanted you to do long ago. The marvel is that in the din and rattle of mills you have done so wondrous well. By all means keep on your travels, since you know so well how to reap their benefits. I shall hope to see you when next you come West. And don't wait until the canal year. Delays are more and more dangerous as sundown draws nigh. j I've just returned from a long fruitful trip. First up the Amazon a thousand miles, and return to Para. Thence to Rio de Janeiro. Thence to Santos and inland four or five hundred miles, in the State of Parana. Thence back to the coast at Paranagua. Thence to Buenos Aires, stopping at many interesting ports by the way. Thence across the Andes to Santiago. Thence south 500 miles up through grant forests to the snow, where I found Arauearia imbricata, a wonderful tree,forming the strangest woods imaginable. Thence back across