Home > All Reminiscences of John Muir > 94 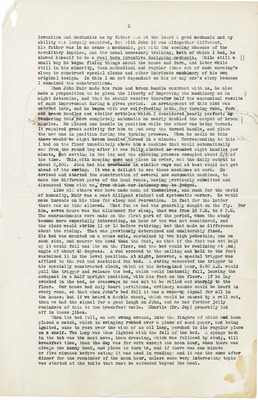 invention and mechanics as my father .vas at the least a good mechanic and my ability was largely acquired, but with John it was altogether different, his father was in no sense a mechanic, yet with the seeming absence of the hereditary impulse, and the usual necessary training, both of which I had, he showed himself to be a real born inventive designing mechanic. While still a small boy he began fixing things about the house and farm, and later while still in his minority, took methodical and regular times out of each morning's sleep to construct special clocks and other intricate machinery of his own original design. In this I am not dependent on his or any one's story because I examined the constructions. When John Muir made his rake and broom handle contract with us, he also made a proposition to be given the liberty of improving the machinery as he might determine, and that he should receive therefor half the economical results of such improvement during a given period. An arrangement of this kind was entered into, and he began with our self-feeding lathe ..for turning rake, fork and broom handles and similar articles, which I considered ^'nearly perfect;'-fey. . rendering this'more completely automatic he nearly doubled the output of broom handles. He placed one handle in position while the other was being turned. It required great activity for him to put away the turned handle, and place the new one in position during the turning process. When he could do this there- wo -■aid-be eight broom handles '.turned in a minute. Corresponding to this l< I had on the floor immediately above him a machine that would automatically saw from^the round log after it was fully slabbed ©a*—rounded eight handles per minute, gut setting in the log and the scabbing process occupied about 3/8 of the time. ThisTwith keeping saws and place in order, cut the daily output to about 2,500. John had his drawbacks in similar ways and at best could not get ahead of the sawing. It was a delight to see those machines at work. He devised and started the construction of several new automatic machines, to make the different parts of the hand rakes, having previously submitted and discussed them with me«T from which our intimacy may be judged. Like all others who have made much of themselves, and much for the world of humanity, Muir was a most diligent student and systematic worker. He would make inroads on his time for sleep and recreation. In fact for the latter there was no time allowed. What fun we had was generally caught on the fly. For him, seven hours was the allotment for sleep, that was from 10 P.M. to 5 P.M. The encroachments were made on the first part of the period, when the study became more especially interesting, an hour or two was not considered, and the clock would strike 11 or 12 before retiring; but that ma.de no difference about the rising. That was previously determined and unalterably fixed. His bed was mounted on a cross axle, sustained by two high pedestals; one on each side, and nearer the head than the foot, so that if the foot was not held up it would fall and lie on the floor, and the bed would be reclining at Lanj angle of about 45 degrees. A rod screwed to the ceiling and held to the foot sustained it in the level position. At night, however, a special trigger was affixed to the rod and sustained the bed. A string connected the trigger to his specially constructed clock, which at the detez&ined hour, 5:00 A.M. would pull the trigger and release the bed, which would instantly fall, leaving the occupant in a half upright position, with his feet on the floor. If he lay crooked in the bed, or crossways he was apt to be rolled out sharply to the floor. Our house had only board partitions, ordinary sounds could be heard in every room, so that when John's bed fell it was a wake-up signal for all in the house; but if we heard a double shock, which would be caused by a roll out, then we had the signal for a good laugh on John, and he had further jolly reminders of this at the breakfast table. Charlie (Mr. Jay) generally led off in these jibes. When the bed fell, an arm swung around, into the fingers of which had been placed a match, which in swinging rubbed over a piece of sand paper, and being ignited, came to rest over the wide of an oil lamp, perched in its regular place on a shelf. The lamp was thus lighted with the fall of the bed. A sponge bath in the tub was the next move, then dressing, which was followed by study, till breakfast time, then the day was for work except the noon hour, when there was always the handy book, and place to turn to, and if there was one minute or five minutes before eating it was used in reading: and it was the same after dinner for the remainder of the noon hour, unless some very interesting topic was started at the table that must be extended beyond the meal.