Home > All Reminiscences of John Muir > 88 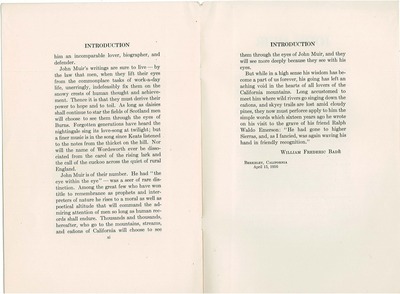 r INTRODUCTION him an incomparable lover, biographer, and defender. John Muir's writings are sure to live — by the law that men, when they lift their eyes from the commonplace tasks of work-a-day life, unerringly, indefeasibly fix them on the snowy crests of human thought and achievement. Thence it is that they must derive their power to hope and to toil. As long as daisies shall continue to star the fields of Scotland men will choose to see them through the eyes of Burns. Forgotten generations have heard the nightingale sing its love-song at twilight; but a finer music is in the song since Keats listened to the notes from the thicket on the hill. Nor will the name of Wordsworth ever be dissociated from the carol of the rising lark and the call of the cuckoo across the quiet of rural England. John Muir is of their number. He had "the eye within the eye" — was a seer of rare distinction. Among the great few who have won title to remembrance as prophets and interpreters of nature he rises to a moral as well as poetical altitude that will command the admiring attention of men so long as human records shall endure. Thousands and thousands, hereafter, who go to the mountains, streams, and canons of California will choose to see INTRODUCTION them through the eyes of John Muir, and they will see more deeply because they see with his eyes. But while in a high sense his wisdom has become a part of us forever, his going has left an aching void in the hearts of all lovers of the California mountains. Long accustomed to meet him where wild rivers go singing down the canons, and skyey trails are lost amid cloudy pines, they now must perforce apply to him the simple words which sixteen years ago he wrote on his visit to the grave of his friend Ralph Waldo Emerson: "He had gone to higher Sierras, and, as I fancied, was again waving his hand in friendly recognition." William Frederic Bade Berkeley, California April 15, 1916