Home > All Reminiscences of John Muir > 86 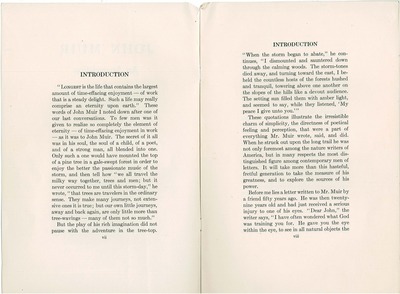 ' Longest is the life that contains the largest amount of time-effacing enjoyment — of work that is a steady delight. Such a life may really comprise an eternity upon earth." These words of John Muir I noted down after one of our last conversations. To few men was it given to realize so completely the element of eternity — of time-effacing enjoyment in work — as it was to John Muir. The secret of it all was in his soul, the soul of a child, of a poet, and of a strong man, all blended into one. Only such a one would have mounted the top of a pine tree in a gale-swept forest in order to enjoy the better the passionate music of the storm, and then tell how "we all travel the milky way together, trees and men; but it never occurred to me until this storm-day," he wrote, "that trees are travelers in the ordinary sense. They make many journeys, not extensive ones it is true; but our own little journeys, away and back again, are only little more than tree-wavings — many of them not so much." But the play of his rich imagination did not pause with the adventure in the tree-top. vii INTRODUCTION "When the storm began to abate," he continues, "I dismounted and sauntered down through the calming woods. The storm-tones died away, and turning toward the east, I beheld the countless hosts of the forests hushed and tranquil, towering above one another on the slopes of the hills like a devout audience. The setting sun filled them with amber light, and seemed to say, while they listened, 'My peace I give unto you.'" These quotations illustrate the irresistible charm of simplicity, the directness of poetical feeling and perception, that were a part of everything Air. Muir wrote, said, and did. When he struck out upon the long trail he was not only foremost among the nature writers of America, but in many respects the most distinguished figure among contemporary men of letters. It will take more than this hasteful, fretful generation to take the measure of his greatness, and to explore the sources of his power. Before me lies a letter written to Mr. Muir by a friend fifty years ago. He was then twenty- nine years old and had just received a serious injury to one of his eyes. "Dear John," the writer says, "I have often wondered what God was training you for. He gave you the eye within the eye, to see in all natural objects the