Home > All Reminiscences of John Muir > 82 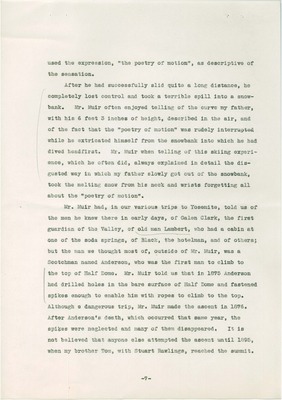 used the expression, wthe poetry of motion**, as descriptive of the sensation. After he had successfully slid quite a long distance, he completely lost control ancl took a terrible spill into a snowbank* Kr. Muir often enjoyed telling of the curve my father, with his 6 feet 3 inches of height, described in the air, and of the fact that the "poetry of Katie®* was rudely interrupted while he extricated himself frors the snowbank into which he had dived headfirst* . r.# Muir when telling of this skiing experience, which he often did, always explained in detail the ii#* justed way in wh;.-...h my father slowly got cut of the snowbank, took the melting snow from his seek and wrists forgetting all about the "poetry of isotion'** Ur. Muir had, in our various trips to Tosemite, told us of the men he knew there in early days, of Galen Clark, the first guardian of the. valley, ofnold tmn Lambert, who had a cabin at one of the soda springs, of Black, the hotelman, ancl of others; but the 3»n we thought most of, outside of Ur* huir, was a Scotchman, named Anderson, who was the first man to climb to the top of Half Borne. Mr. Muir told us that in 1875 Anderson had d.rilled holes in the bare surface of Half Dome and fastened spikes enough to enable him with ropes to climb to the top* Although s dangerous trip, Mr* Muir mad® the ascent in 1876* After Anderson*p death, which occurred that sa» year, the spikes were neglected and. aany of them disappeared* It is not believed that anyone else attempted the ascent until 1B9S, when my brother Tom, with Stuart B&wllngs, readied the summit* •m*f tm>