Home > All Reminiscences of John Muir > 80 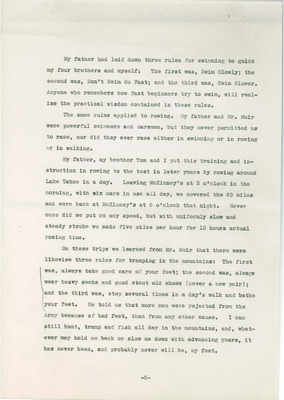 My father had laid down three rules for swimlng to guide my four brothers and myself* The first was, Swim Slowly; the second was, Don't Swiss So .Fast; and the third was, Swim Slower* Anyone who remembers how fast beginners try to swim, will real* ize the practical wisdom contained in these rules* The same rules applied to rowing, hy father sad Mr. Muir were powerful ewiswsers and oarsman, but they n&v&r permitted us to race, nor did they ever race either in ©wireoinff or in rowing or in walking* ?.-y father, ay brother Tom and I put this training and instruction in rowing to the test in later years by rowing around Lake Tahoe in a day. Leaving McKinney's at'5 o'clock in the morning, with six oars in use ail day, we covered the 65 miles and were back at MeJCinney's at 3 o'clock that night. -fever once did we put on any speed, but with uniformly slow and steady stroke we made five miles per hour for 15 hours actual rowing time* On thee© trips we learned from Mr. Muir that there were likewise three rules for trapping in the mountains: The first m.Bt always take good care of your feet; the second was, always wear heavy sock© and scod stout old shoes {sever a new pair); Vend the third was, stop several times in a day's walk and bathe I your feet* Be told as that more men were rejected froa the v Army because of bad feet, than from any other cause* I can still hunt, tramp and fish all d^y in the mountains, and, whatever mey hold se back, or slow sae down with advancing years, it has nav&r been, and probably never will be, sty feet. -5-