Home > All Reminiscences of John Muir > 77 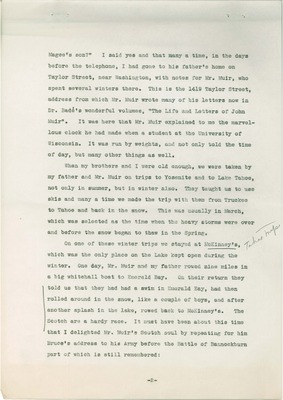 Hsgee's son?" I said yes and that many a Mate, in the days before the telephone, I had gon@ to his father's home on Taylor Street, near Washington, with notes for Mr* Muir, who spent several winters there. This is the 1419 Taylor Street, address from which Mr. Muir wrote many of his letters now in Br. Bade's wonderful volumes, "The Life. &n& tetters of John Msir** It was here that Ur* Muir explained to hs the marvellous clock he had made when a studeat at the University of Wisconsin. It was run by weights, and not only told the time of day, but ©any other things as well* When my brothers end I were old enough, we were taken by ay father and r#r. Muir on trips to Yoseraite snd to LaHe Tahoe, not only in summer, but In winter also, Thay taught us to use skis and irsany a time we raade the trip with the© fro© Truokee to Tahoe and back in the snow* This ts&s usually in March, which was selected as the time whss the heavy storms were over and before the snow began to thaw in the Spring, On one of these winter trips we stayed at h*cKinney'a, /|Vr' which was the only place on the Lake kept open during the winter* One &&yf Mr* hhjir and my father rowed nine mile© in a. big Whitehall boat to Sen re Id Bay* On their return they told us that they had had a swis in .'.nior&id Bay, had then rolled around is the snow, like a couple of boys, and after another splash in th# lakes, rowed bach to S&Klsmey*s, The Scotch are a hardy race, It mm% have bs*©ii about this tins that 1 delighted Mr* S8alr*a scotch soul by repeating for his Bruce' & address to his Arsay before the Battle ©f Bsnnoekburn part of which is still resecbered: