Home > All Reminiscences of John Muir > 70 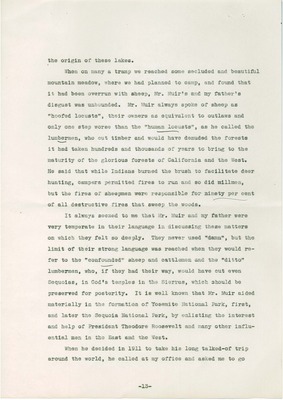 the origin of these lakes, When on many a tramp as reached some secluded and beautiful mountain meadow, where we had planned, to camp, and found that it had been overrun with sheep, Mr. hhiir*s and say father*s disgust was unbounded. Mr. Hair always ©poke ot sheep as "hoofed locusts**, their owners as equivalent to outlaws and only one step worse than the "Imams locusts'*, as he called the lumbermen, who cut timber and would have denuded the forests it had taken hundreds and thousands of years to bring to the maturity of the glorious forests of California and the West. He said that while Indians burned, the brush to facilitate deer hunting, campers permitted fires to run and so did mlUmen, but the fires of sheepmen were responsible for ninety per cent of all destructive fires that sweep the woods* It always seamed to me. t&svt hr. Pair and xy father sere very temperate in their language ia discussing these matters on shies they felt so deeply. They aster used "damn", but the limit of tt-eir strong language was reached »hen they would refer to the *confounded" sheep and cattlemen and the "ditto* lumbermen, who, if they had their way, would have cut even Sequoias, in Cod's temples in Ihe Sierras, which should be preserved for posterity* It is well known that Mr. Muir aided Kietariaiiy in the formation of Tosamite national Park, first, and later the Sequoia national Park, by enlisting the Interest and help of President Theodore Booeevelt ami racy other influential men in the East and the flest. When, he decided in 19II to take his long talked-of trip around the world, he called at my office and ashed me to go -15-