Home > All Reminiscences of John Muir > 69 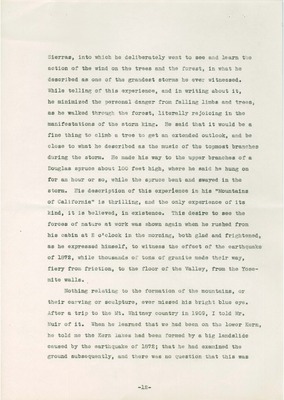 Sierras, into which he deliberately went to see and learn t « action of the wind on the trass and the forest, in what af described as one of the grandest ©tors® he ever witnessed. While telling of this experience,, and in writing about it, he minimi&©d the personal danger froa failing limbs and tr#e«j a® he walked through the forest, literally rejoicing In the manifestations of the stora king* He said that it would be a fins thing to climb s tree to get an extended outlook, and be close to what he described as the anisic of the topmost branches during the sfcons. He made his way to feme upper branches of a Douglas spruce about 100 feet high, where he said ha hung on for an hour or so, while the spruce bent and swayed in the stora. His description of this experience in his "Mountains of California" is thrilling, and the only experience of its kind, it is believed, in existence. This desire to see the forces of nature at work was shown again when he rushed fro* his cabin at I o'clock in the morning, both glad and frightened, as he expressed himself, to witness the effect of the earthquake of 1372, while thousands oh tons of granite ssa&e their way, fiery from friction, to the floor of the Valley, from the Yq Semite walls, Nothing relating to the formation ef the mountains, or their carving or sculpture, ever missed his bright blue eye. After a trip to the Sit. snitnay country in 1999, I told Mr, huir of it. When he learned that we had been on the lower Kern, he told MB the Kern lakes had been .formed by a big landslide caused by the earthquake of 187 g; that be had examined the ground subsequently, and there was no question that this was ^X^i**