Home > All Reminiscences of John Muir > 67 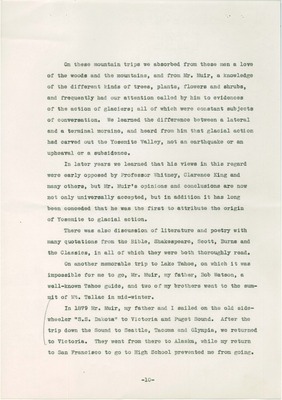 On these mountain trips we absorbed fro® these isen a love of the woods and the mountains, and frost Mr, Ituir, a knowledge of the different kinds of trees, plants, flowers and shrubs, and frequently had our attention called by hla to evidences of the action of glaciers; all of which were constant subjects of conversation* is learned the difference between a lateral and a tarsias! taoraine, and heard froa his inet glacial action had carved out the Yosemite Valley, not an earthquake or an upheaval or a subsidence. In later years we learned that his views in this regard were early opposed hj Professor Whitney, Clarence King and m&nj others, but Mr. Mulr*s opinions and conclusions are now not only universally accepted, but in addition it has long been conceded that he was the first to attribute the origin of Yosemite to glacial action. There was also discussion of literature and poetry with laany quotations from the Bible, Shakespeare, Scott, Burns and the Classics, in ail of which they were both thoroughly read. On another memorable trip to Lake fahoe, on which it was impossible for na to go, Mr. Muir, asy father, Bob Watson, a well-known Taboo guide, and two. of sy brothers want to the suss- g|lt of ?»?t. Teliae in aid-winter. In 1879 lr« .Muir, ssy father and I sailed on the old si&e- f wheeler *S,3. Dakota'* to Victoria and Paget Sound. After the trip down the Sound to Seattle, Tacoaa and Olympia, we returned to Victoria, They went from there to Alaska, while ay return to San Francisco to go to High School prevented tae fro© going. -10-