Home > All Reminiscences of John Muir > 60 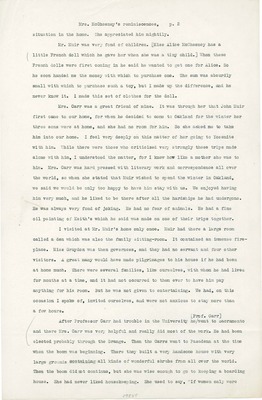 Mrs. McChesney's reminiscences, p. 2 situation in the home. She appreciated him mightily. Mr. Muir was very fond of children. [Miss Alice McChesney has a little French doll which he .gave her when she was a tiny child.] When these French dolls were first coming in he said he wanted to get one for Alice. So he soon handed me the money with which to purcha.se one. The sum v/as absurdly small with which to purchase such a toy, but I made up the difference, and he never knew it. I made this set of clothes for the doll. Mrs. Carr was a great friend of mine. It was through her that John Muir first came to our home, for when he decided to come to Oakland for the v/inter her three sons were at home, and she had no room for him. So she asked me to take him into our home. I feel very deeply on this matter of her going to Yosemite with him. While there were those who criticized very strongly these trips made alone v/ith him, I understood the matter, for I knew how like a mother she was to him. Mrs. Carr was hard pressed with literary work and correspondence all over the world, so when she stated that Muir wished to spend the v/inter in Oakland, we said we would be only too happy to have him stay with us. We enjoyed having him very much, and he liked to be there after all the hardships he had undergone. He was always very fond of joking. He had no fear of animals. He had a fine oil painting of Keith's which he said was made on one of their trips together. I visited at Mr. Muir's home only once. Muir had there a large room called a den which v/as also the family sitting-room. It contained an immense fireplace. Miss Graydon v/as then governess, and they had no servant and four other visitors. A great many would -have made pilgrimages to his house if he had been at home much. There were several families, like ourselves, with whom he had livea for months at a time, and it had not occurred to them ever to have him pay anything for his room. But he was not given to entertaining. We had, on this occasion I spoke of, invited ourselves, and were not anxious to stay more than a few hours. [Prof. Carr] After Professor Carr had trouble in the University he/went to aacramento and there Mrs. Carr was very helpful and really did most of the work. He had been elected probably through the Grange. Then the Carrs went to Pasadena at the time when the boom was beginning. There they built a very handsome house with very large grounds geatain-ing all kinds of wonderful shrubs from all over the world. Then the boom did not continue, but she was wise enough to go to keeping a boarding house. She had never liked housekeeping. She used to say, "If women only wore Off*.