Home > All Reminiscences of John Muir > 59 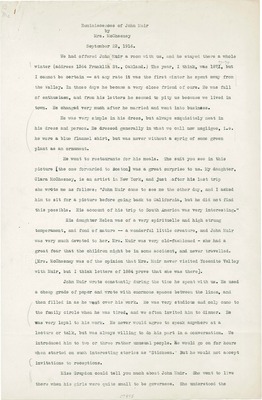 \ Reminiscences of John Muir by Mrs. McChesney September 22, 1916. We had offered John/Muir a room with us, and he stayed there a whole winter (address 1364 Franklin St., Oakland.) The year, I think, was 187/, but I cannot be certain — at any rate it was the first winter he spent away from the Valley. In those days he became a very close friend of ours. He was full of enthusiasm, and from his letters he seemed to pity us because we lived in town. He changed very much after he married and went into business. He was very simple in his dress, but always exquisitely neat in his dress and person. He dressed generally In what we call now negligee, i.e. he wore a blue flannel shirt, but was never without a sprig of some green plant as an ornament. He went to restaurants for his meals. The suit you see in this picture [the one forwarded to BostonJ was a great surprise to us. My daughter, Clara McChesney, is an artist in New York, and just after his last trip she wrote me as follows; "John Muir came to see me the other day, and I asked him to sit for a picture before going back to California, but he did not find this possible. His account of his trip to South America v/as very interesting." His daughter Helen was of a very spirituelle and high strung temperament, and fond of nature — a wonderful little creature, and John Muir was very much devoted to her. Mrs. Muir was very old-fashioned - she had a great fear that the children might be in some accident, and never travelled. |_Mrs. McChesney was of the opinion that Mrs. Muir never visited Yosemite Valley with Muir, but I think letters of 1884 prove that she was there]. John Muir wrote constantly during the tine he spent with us. He used a cheap grade of paper and wrote with enormous spaces between the lines, and then filled in as he west over his work. He was very studious and only came to the family circle when he v/as tired, and we often invited him to dinner. He was very loyal to his work. He never would agree to speak anywhere at a lecture or talk, but was always willing to do his part in a conversation. We introduced him to two or three rather unusual people. He would go on for hours v/hen started on such interesting stories as "Stickeen. But he would not accept I invitations to receptions. Miss Graydon could tell you much about John Muir. She went to live there when his girls were quite small to be governess. She understood the