Home > All Reminiscences of John Muir > 50 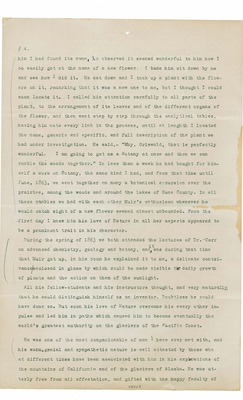 # 4. / him I had found its namef Le observed it seemed wonderful to him how I so easily got at the name of a new flower- I bade him sit down by me and see how * did it. He sat down and I took up a plant with the flowers on it, remarking that it was a new one to me, but I thought I could soon locate it. I called his attention carefully to all parts of the plant, to the arrangement of its leaves and of the different organs of the flower, and then went step by step through the analytical tables, having him note every link in the process, until at lenghth I located the name, generic and specific, and full description of the plant we had under investigation. He said,- "Why, Griswold, that is perfectly wonderful. I am going to get me a -botany at once and then we can ramble the woods together." In less than a week he had bought for himself a work on Botany, the same kind I had, and from that time until June, l863» we. went together on many a botanical excursion over the prairies, among the woods and around the lakes of Dane County. In all these rambles we had with each other Muir's enthusiasm whenever he would catch sight of a new flower seemed almost unbounded. From the •first day I knew him his love of Nature in all her aspects appeared to be a prominent trait in his character. f During the spring of 1863 we both attended the lectures of Dr.'Carr it on advanced chemistry, geology and botany, and. was during that time that Muir got up, in his room he explained it to me, a delicate contrivance/enclosed in glass by which could be made visible tie daily growth of plants and the action on them of the sunlight. All his fellow-students and his instructors thought, and very naturally, that he would distinguish himself as an inventor. Doubtless he could have done so. But soon his love of Mature overcame his every other impulse and led him in paths which caused him to become eventually the world's greatest authority on the glaciers of the Pacific Coast. / He was one of the most companionable of men 1 have ever met with, and his warm,genial and sympathetic nature is -well attested by those who at different times have been associated with him in his explorations of the mountains of California and of the glaciers of Alaska. He was utterly free from all affectation, and gifted with the happy faculty of