Home > All Reminiscences of John Muir > 49 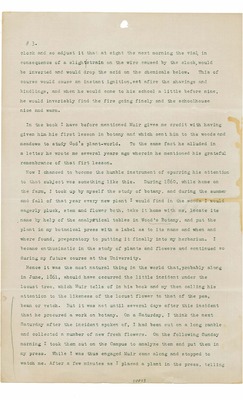 # 3. clock and so adjust it that at eight the next morning the Vial, in consequence of a slightfstrain on the wire caused by the clock,would be inverted and would drop the a,cid on the chemicals below. This of course would cause an instant ignition,set afire the shavings and kindlings, and. when he would come to his school a little before nine, he would invariably find the fire going finely, and the schoolhouse nice and warm. a In the book I have before mentioned Muir gives me credit with having given him his first lesson in botany and which sent him to the woods and meadows to study God's plant-world. To the same fact he alluded in a letter he wrote me several years ago wherein he mentioned his grateful remembrance of that firt lesson. How I chanced to become the humble instrument of spurring his attention to that subject was something like this. During i860, while home on the farm, I took up by myself the study of botany, and during the summer and fall of that year every new plant I would find in the woods I would eagerly pluck, stem and flower both, take it home with me, locate its t name by help of the analytical tables in Wood's Botany, and put the plant in my botanical press with a label as to its name and when and where found, preparatory to putting it finally into my herbarium. I became enthusiastic in the study of plants and flowers and continued so during my future course at the University. Hence it was the most natural thing in the world that,probably along in June, l86l, should have occurred the little incident under the locust tree, which Muir tells of in his book and my then calling his attention to the likeness of the locust flower to that of the pea, bean or vetch. But it was not until several days after this incident that he procured a work on botany. On a Saturday, I think the next Saturday after the incident spoken of, I had been out on a long ramble and collected a number of new fresh flowers. On the following Sunday morning I took them out on the Campus to analyze them and put them in my press. While I was thus engaged Muir came along and stopped to watch me. After a few minutes as I placed a plant in the press, telling oft *■?