Home > All Reminiscences of John Muir > 48 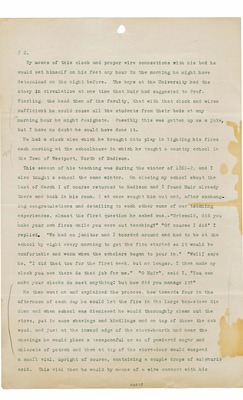 By means of this clock and proper wire connections with his bed he would set himself on his feet any hour in the morning he might have determined on the night before. The boys at the University had the story in circulation at one time that Muir had suggested to Prof. Sterling, the head then of the faculty, that with that clock and wires sufficient he could rouse all the students from their beds at any ' morning hour he might designate. Possibly this was gotten up as a joke, but I have no doubt he could have done it. He had a clock also which he brought into play in lighting his fires each morning at the schoolhouse in which he taught a country school in the Town of Westport, North of Madison. This season of his teaching was during the winter of l86l-2, and I also taught a school the same winter. On closing my school about the last of March I of course returned to Madison and I found Muir already there and back in his room. I at once sought him out and, after exchanging congratulations and detailing to each other some of our teaching experiences, almost the first question he asked was,-"Griswold, did you make your own fires while you were out teaching?" "Of course I did" I replied, "We had no janitor and I boarded around and had to be at the school by eight every morning to get the fire started so it would be comfortable and warm when the scholars began to pour in," "Well" says he, "I did that too for the first week, but no longer. I then made my clock you see there do that job for me." "0 Muir", said I, "You can . make your clocks do most anything: but how did you manage it?" He then went on and explained the process, how towards four in the afternoon of each day he would let the fire in the large box-stove die down and when school was dismissed he would thoroughly clean out the stove, put in some shavings and kindlings and on top of those the oak wood, and just at the inward edge of the stove-hearth and near the shavings he would place a teaspoonful or so of powdered sugar and \ chlorate of potash and then at top of the stove-door would suspend a small vial, upright of course, containing a couple drops of sulphuric acid. This vial then he would by means of a wire connect with his