Home > All Reminiscences of John Muir > 47 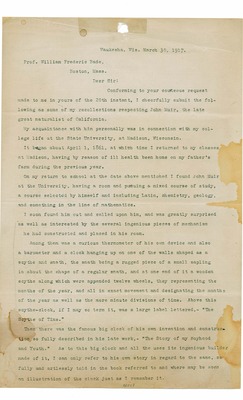 Waukesha, Wis. March 30, 1917. Prof. William Frederic Bade, Boston, Mass. Desr Sir: Conforming to your courteous request made to me in yours of the.20th instant, I cheerfully submit the following as seme of my recollections respecting John Muir, the late great naturalist of California. My acquaintance with him personally was in connection with my college life at the State University, at Madison, Wisconsin. It bugan about April 1, l86l, at which time I returned to my classes at Madison, having by reason of ill health been home on my father*s farm during the previous year. On my return to school at the date above mentioned I found John Muir at the University, having a room and puf^uing a mixed course of study, a course selected by himself and including Latin, chemistry, geologys and some tiling in the line of mathematics. I soon found him out and called upon him, and was greatly surprised as well as interested by the several ingenious pieces of mechanism he had constructed and placed in his room. Among them was a curious thermometer of his own device and also a barometer and a clock hanging up on one of the walls shaped as a scythe and snath, the snath being a rugged piece of a small sapling in about the shape of a regular snath, and at one end of it a wooden scythe along which were appended tv/elve wheels, they representing the months of the year, and all in exact movement and designating the months of the year as well as the more minute divisions of time. Above thi3 • scythe-clcck, if I may so term it, was a large label lettered,- "The Scythe of Time." Then there was the famous big clock of his own invention and construe ~iiion, so fully described in his late work,- "The Story of my Boyhood and Youth." As to this big clock and all the uses its ingenious builder made of it, I can only refer to his own story in regard to the same, so fully and artlessly told in the book referred to and where may be seen an illustration of the clock just as I remember it. of,-