Home > All Reminiscences of John Muir > 44 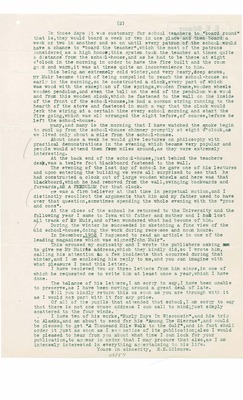 (2) In those days it Wc-s customary for school teachers to "board round" that is,they would board a week or two in one place and then board a week or two in another and so on until ever}*- patron of the school would have a chance to "board the teacher",which the most of the patrons considered as a high honor;this system took the teacher at times quite a distance' from the schod-house,and as he had to be there at eight o'clock in the morning in order to have the fire built and the room good and warm,it was at times quite an inconvenience to him. This being an extremely cold winter,and very heavy,deep snows, Mr Muir became tired of being compelled to reach the school-house so early in the morning,so he constructed a clock,every part of which was wood with the exception of the springs,wooden frame,wooden wheels wooden pendulum,and even the ball on the end of the pendulum w; s wood and from this wooden clock,which he fastened to the wall en the inside of the front of the school-house,he had a common string running to the hearth of the stove and fastened in such a way that the clock would jerk the string at a certain time every school morning and start the fire going,which was all arranged the night before,of course,before he left the school-house. Many,and many is the morning that I have watched the smoke begin to curl up from the school-house chimney promptly at eight o°'clock, as we lived only about a mile from the school-house. About once a week he would give lectures on philosophy with practical demonstrations in the evening which became vexy popular and people would attend them furon miles around,as they were extremely interesting. At the back end of the scho&-house,just behind the teachers desk,was a twelve foot blackboard fastened to the wall. The evening of the last day of school he gave one of his lectures and upon entering the building we were all surprised to see that he had constructed a clock out of large wooden wheels and here was that blackboard,which he had removed from the wall,swinging backwards and forwards,AS A PEEDULUM for that clock. Tie was a firm believer at that time in perpetual motion,and I distinctly recollect the arguments that him and my father used to have over that question,sometimes spending the whole evening with the "pros and cons". At the close of the school he returned to the University and the following year I came to Iowa with father and mother and I hati lost all track of Mr Muir,and often wondered what had become of him. / During the winter he succeeded in sketching a fine view of the bid school-house,doing the work during recesses and noon hours. In December, 1908 I happened to read an article in one of the leading magazines which was signed"John Muir". This aroused my curiosity and I wrote the publishers asking mbc to give me Mr Muirfts address,which they kindly did,so I wrote him, calling his attention ao a few incidents that occurred during that winter,and I am enclosing his reply to me,and you can imagine with what pleasure I read this letter. I have recieved two or three letters from him since,in one of which he requested me to write him at least once a year,which I have done. The balance of his lettere,I am sorry to say,I have been unable to preserve,as I have been moving around a great deal of late. Will you kindly return this as soon as you are through with it as I would noy, part with it for any price. Of all of the pupils that attended that school,I am sorry to say that there is not one whose address I can call, to mind;just simply scattered to the four winds. I have two of his works,"Early Days In Wisconsin",and his trip to Alaska,and am about to send for his "Among The Sierras",and would be pleased to get "A Thousand Mile Y/alk to the Gulf", and in fact shall order it just as soon as I see notice of its publication;also I would be pleased to hear from you about what time I can look for your publication, to appear in order that I may procure that also, as I am intensely interested in everything appertaining to his life. Yours in sincerity, E.E.Gilmore.