Home > All Reminiscences of John Muir > 43 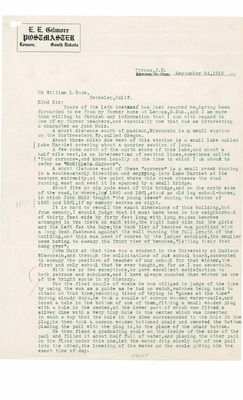 E. E. Gilmore POSTMASTER Lennox, South Dakota Tyrone, N.M. September 24,1916—191 Mr William L. Bade, Berkeley,Calif, Kind Sir: Yours of the 14th instint/ has just reached me,having been forwarded to me from my former home at Lennox,S.Dak.,and I am more than willing to furnish any information that I can with regard to one of my former teachers,and especially one that was as interesting a character as John Muir. A short distance south of gadison,Wisconsin is a small station on the Northwestern Ry. called Oregon, About three miles due west of this station is a small lake called /Lake Harriet covering about a quarter section of land. A few rods north of the north shore of this lake,and about a half mile west,is an intersection of section lines,sometimes called "four corners*,and known locally at the time to which I am about to refer as "McKibbfiXs-jCorners". A short distance east of these "corners" is a small creek running in a southeasterly direction find emptying into Lake Harriet at its western extremity;at the point where this creek crosses the road running east and west it is spanned by a small bridge. About five or six rods east of this bridge,and on the north side of the road,is where,in/ 1860 and 1861,stood an old log school-house, in which John Muir taught "the young idees" during the winter of 1860 and 1861,if my memory serves me right. It is hard to recall the exact dimensions of this building,but from memory, I should judge that it must have been in the neighborhood of thirty feet wide by forty feet long with long wooden benches arranged in two tiers on each side,the right hand side for the girls and the left for the boys;the back tier of benches was provided with a long desk fastened against the wall running the full length of the building, and this was ussd of course by the larger scholars,the smaller ones having to occupy the front tier of benches,"letting their feet hang over". John Muir at that time was a student in the University at Madison Wisconsin,and through the solicitations of out school board,consented to occupy the position of teacher of our school for that winter,the first arid only school that he ever taught, so far as I can ascertain. With one or two exceptions,he gave excellent satisfaction to both patrons and scholars,and I have always counted that winter as one of the bright spots in my history. For the first couple of weeks he was obliged to judge of the time by using the sun as a guide as he had no watch,watches being hard to obtain at that time;becoming tired of trying to "guess at the time" during cloudy days,he took a couple of common wooden water-pails,and bored a hole" in the bottom of one of them, fit ling a small wooden plug with a hole in the center,at the lower part of which was fitted a silver dime with a very tiny hole in the center which was inserted in such a way that the hole in the dime corresponded to the hole in the plug;he then took a common wooden bottomed chair and removed the bottom placing the pail with the plug in,in the place of the chair bottom. He then fixed a graduating scale on the'inside of the side of the pail and filled it about half full of water,and placing the other pail on the floor under this one,let the water drip slowly out of one pail into the other,the lowering of the water on the scale giving him the exact time of day.