Home > All Reminiscences of John Muir > 41 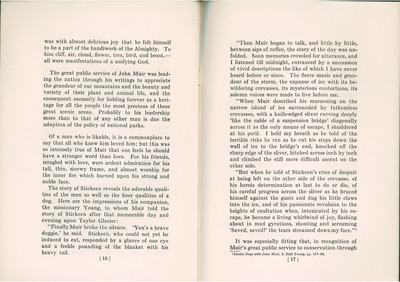 was with almost delirious joy that he felt himself to be a part of the handiwork of the Almighty. To him cliff, air, cloud, flower, tree, bird, and beast,— all were manifestations of a unifying God. The great public service of John Muir was leading the nation through his writings to appreciate the grandeur of our mountains and the beauty and variety of their plant and animal life, and the consequent necessity for holding forever as a heritage for all the people the most precious of these great scenic areas. Probably to his leadership more than to that of any other man is due the adoption of the policy of national parks. Of a man who is likable, it is a commonplace to say that all who knew him loved him; but this was so intensely true of Muir that one feels he should have a stronger word than love. For his friends, mingled with love, were ardent admiration for his tall, thin, sinewy frame, and almost worship for the inner fire which burned upon his strong and noble face. The story of Stickeen reveals the adorable qualities of the man as well as the finer qualities of a dog. Here are the impressions of his companion, the missionary Young, to whom Muir told the story of Stickeen after that memorable day and evening upon Taylor Glacier: "Finally Muir broke the silence. 'Yon's a brave doggie,' he said. Stickeen, who could not yet be induced to eat, responded by a glance of one eye and a feeble pounding of the blanket with his heavy tail. [16] "Then Muir began to talk, and little by little, between sips of coffee, the story of the day was unfolded. Soon memories crowded for utterance, and I listened till midnight, entranced by a succession of vivid descriptions the like of which I have never heard before or since. The fierce music and grandeur of the storm, the expanse of ice with its bewildering crevasses, its mysterious contortions, its solemn voices were made to live before me. "When Muir described his marooning on the narrow island of ice surrounded by fathomless crevasses, with a knife-edged sliver curving deeply 'like the cable of a suspension bridge' diagonally across it as the only means of escape, I shuddered at his peril. I held my breath as he told of the terrible risks he ran as he cut his steps down the wall of ice to the bridge's end, knocked off the sharp edge of the sliver, hitched across inch by inch and climbed the still more difficult ascent on the other side. "But when he told of Stickeen's cries of despair at being left on the other side of the crevasse, of his heroic determination at last to do or die, of his careful progress across the sliver as he braced himself against the gusts and dug his little claws into the ice, and of his passionate revulsion to the heights of exultation when, intoxicated by his escape, he became a living whirlwind of joy, flashing about in mad gyrations, shouting and screaming 'Saved, saved!' the tears streamed down my face."1 It was especially fitting that, in recognition of Muir's great public service to conservation through ^Alaska Days with John Muir, S. Hall Young, pp. 187- [17 1