Home > All Reminiscences of John Muir > 36 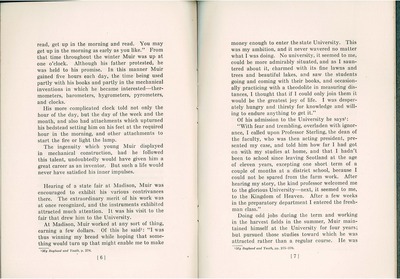 read, get up in the morning and read. You may get up in the morning as early as you like." From that time throughout the winter Muir was up at one o'clock. Although his father protested, he was held to his promise. In this manner Muir gained five hours each day, the time being used partly with his books and partly in the mechanical inventions in which he became interested—thermometers, barometers, hygrometers, pyrometers, and clocks. His more complicated clock told not only the hour of the day, but the day of the week and the month, and also had attachments which upturned his bedstead setting him on his feet at the required hour in the morning, and other attachments to start the fire or light the lamp. The ingenuity which young Muir displayed in mechanical construction, had he followed this talent, undoubtedly would have given him a great career as an inventor. But such a life would never have satisfied his inner impulses. Hearing of a state fair at Madison, Muir was encouraged to exhibit his various contrivances there. The extraordinary merit of his work was at once recognized, and the instruments exhibited attracted much attention. It was his visit to the fair that drew him to the University. At Madison, Muir worked at any sort of thing, earning a few dollars. Of this he said1: "I was thus winning my bread while hoping that something would turn up that might enable me to make 'My Boyhood and Youth, p. 274. [6] money enough to enter the state University. This was my ambition, and it never wavered no matter what I was doing. No university, it seemed to me, could be more admirably situated, and as I sauntered about it, charmed with its fine lawns and trees and beautiful lakes, and saw the students going and coming with their books, and occasionally practicing with a theodolite in measuring distances, I thought that if I could only join them it would be the greatest joy of life. I was desperately hungry and thirsty for knowledge and willing to endure anything to get it." Of his admission to the University he says1: "With fear and trembling, overladen with ignorance, I called upon Professor Sterling, the dean of the faculty, who was then acting president, presented my case, and told him how far I had got on with my studies at home, and that I hadn't been to school since leaving Scotland at the age of eleven years, excepting one short term of a couple of months at a district school, because I could not be spared from the farm work. After hearing my story, the kind professor welcomed me to the glorious University—next, it seemed to me, to the Kingdom of Heaven. After a few weeks in the preparatory department I entered the freshman class." Doing odd jobs during the term and working in the harvest fields in the summer, Muir maintained himself at the University for four years; but pursued those studies toward which he was attracted rather than a regular course. Lie was lMy Boyhood and Youth, pp. 275-276.