Home > All Reminiscences of John Muir > 35 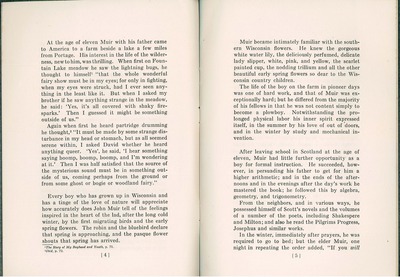 ■HBmHHHH^ At the age of eleven Muir with his father came to America to a farm beside a lake a few miles from Portage. His interest in the life of the wilderness, new to him, was thrilling. When first on Fountain Lake meadow he saw the lightning bugs, he thought to himself1 "that the whole wonderful fairy show must be in my eyes; for only in fighting, when my eyes were struck, had I ever seen anything in the least like it. But when I asked my brother if he saw anything strange in the meadow, he said: 'Yes, it's all covered with shaky fire- sparks.' Then I guessed it might be something outside of us." Again when first he heard partridge drumming he thought,2 "It must be made by some strange disturbance in my head or stomach, but as all seemed serene within, I asked David whether he heard anything queer. 'Yes', he said, T hear something saying boomp, boomp, boomp, and I'm wondering at it.' Then I was half satisfied that the source of the mysterious sound must be in something outside of us, coming perhaps from the ground or from some ghost or bogie or woodland fairy." Every boy who has grown up in Wisconsin and has a tinge of the love of nature will appreciate how accurately does John Muir tell of the feelings inspired in the heart of the lad, after the long cold winter, by the first migrating birds and the early spring flowers. The robin and the bluebird declare that spring is approaching, and the pasque flower shouts that spring has arrived. 'Tte Story of My Boyhood and Youth, p. 71. Hbid, p. 72. [41 Muir became intimately familiar with the southern Wisconsin flowers. He knew the gorgeous white water lily, the deliriously perfumed, delicate lady slipper, white, pink, and yellow, the scarlet painted cup, the nodding trillium and all the other beautiful early spring flowers so dear to the Wisconsin country children. The life of the boy on the farm in pioneer days was one of hard work, and that of Muir was exceptionally hard; but he differed from the majority of his fellows in that he was not content simply to become a plowboy. Notwithstanding the prolonged physical labor his inner spirit expressed itself, in the summer by his love of out of doors, and in the winter by study and mechanical invention. After leaving school in Scotland at the age of eleven, Muir had little further opportunity as a boy for formal instruction. He succeeded, however, in persuading his father to get for him a higher arithmetic; and in the ends of the afternoons and in the evenings after the day's work he mastered the book; he followed this by algebra, geometry, and trigonometry. From the neighbors, and in various ways, he possessed himself of Scott's novels and the volumes of a number of the poets, including Shakespere and Milton; and also he read the Pilgrims Progress, Josephus and similar works. In the winter, immediately after prayers, he was required to go to bed; but the elder Muir, one night in repeating the order added, "If you will