Home > All Reminiscences of John Muir > 30 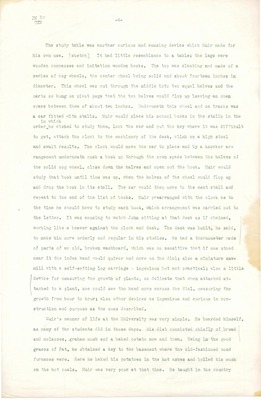 ~" by 4.- CSV The study table was another curious and amusing device which Muir made for his own use. fsketch] It had little resemblance to a table; the legs were wooden compasses and imitation wooden books. The top was slanting and made of a series of cog wheels, the center wheel being solid and about fourteen inches in diameter. This wheel was cut through the middle into two equal halves and the parts so hung on pivot pegs that the two halves would flop up leaving an ooen space between them of about two inches. Underneath this wheel and on tracks was a car fitted with stalls. Muir would place his school books in the stalls in the in which orderAhe wished to study them, lock the car and put the key where it was difficult to get, attach the clock to the machinery of the desk, climb on a high stool and await results. The clock would move the car to place and by a knocker arrangement underneath push a book up through the open space between the halves of the solid cog wheel, close down the halves and open out the book. Muir would study that book until time was up, when the halves of the wheel would flop up and drop the book in its stall. The car would then move to the next stall and repeat to the end of the list of books. Muir prearranged with the clock as to the time he should have to study each book, which arrangement was carried out to the letter. It was amusing to watch John sitting at that desk as if chained, working like a beaver against the clock and desk. The desk was built, he said, to make him more orderly and regular in his studies. He had a thermometer made of parts of an old, broken washboard, which was so sensitive that if one stood near it the index hand would quiver and move on the dial; also a miniature sawmill with a self-setting log carriage - ingenious but not practical; also a little I device for measuring the growth of plants, so delicate that when attached at- ? tached to a plant, one could see the hand move across the dial, measuring the growth from hour to hour; also other devices as ingenious and curious in construction and purpose as the ones described. Muir's manner of life at the University was very simple. He boarded himself, a3 many of the students did in those days. His diet consisted chiefly of bread ; and molasses, graham mush and a baked potato now and then. Being in the good graces of Pat, he obtained a key to the basement 'where the old-fashioned wood furnaces were. Here he baked his potatoes in the hot ashes and boiled his mush on the hot coals, Muir was very poor at that time. He taught in the country