Home > All Reminiscences of John Muir > 26 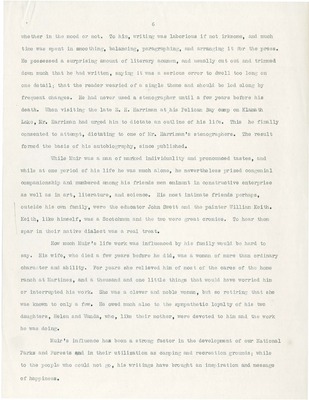 whether in the mood or not. To him, writing was laborious if not irksome, and much time was spent in smoothing, balancing, paragraphing, and arranging it for the press. He possessed a surprising amount of literary acumen, and usually cut out and trimmed down much that he had written, saying it was a serious error to dwell too long on one detail; that the reader v/earied of a single theme and should be led along by frequent changes. He had never used a stenographer until a few years before his death. When visiting the late E. H. Harriman at his Pelican Bay camp on Klamath Lake, Mr. Harriman had urged him to dictate an outline of his life. This he finally consented to attempt, dictating to one of Mr. Harriman's stenographers. The result formed the basis of his autobiography, since published. While Muir was a man of marked individuality and pronounced tastes, and while at one period of his life he was much alone, he nevertheless prized congenial companionship and numbered among his friends men eminent in constructive enterprise as well as in art, literature, and science. His most intimate friends perhaps, outside his own family, were the educator John Swett and the painter William Keith, Keith, like himself, was a Scotchman and the two were great cronies. To hear them spar in their native dialect v/as a real treat. How much Muir's life work was influenced by his family would be hard to say. His wife, who died a few years before he did, was a woman of more than ordinary character and ability. For years she relieved him of most of the cares of the home ranch at Martinez, and a thousand and one little things that would have worried him or interrupted his work. She was a clever and noble woman, but so retiring that she was known to only a few. He owed much also to the sympathetic loyalty of his two daughters, Helen and Wanda, who, like their mother, were devoted to him and the work he v/as doing, Muir's influence has been a strong factor in the development of our National Parks and Forests and in their utilization as camping and recreation grounds; while to the people who cotild not go, his writings have brought an inspiration and message of happiness.