Home > All Reminiscences of John Muir > 24 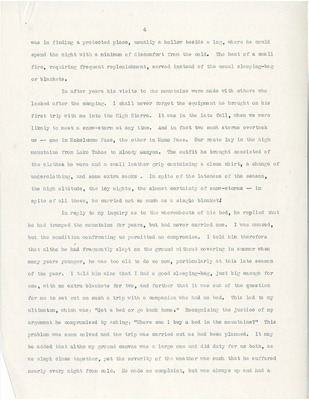 4 was in finding a protected place, usually a hollow beside a log, where he could spend the night with a minimum of discomfort from the cold. The heat of a small fire,, requiring frequent replenishment, served instead of the usual sleeping-bag or blankets. In after years his visits to the mountains were made with others who looked after the camping. I shall never forget the equipment he brought on his first trip with me into the High Sierra. It was in the late fall, when we were likely to meet a snow-storm at any time. And in fact two such storms overtook us — one in Mokelurane Pass, the other in Mono Pass. Our route lay in the high mountains from Lake Tahoe to Bloody Canyon. The outfit he brought consisted of the clothes he wore and a small leather grip containing a clean shirt, a change of underclothing, and some extra socks . In spite of the lateness of the season, the high altitude, the icy nights, the almost certainty of snow-storms — in spite of all these, he carried not so much as a single blanket J In reply to my inquiry as to the whereabouts of his bed, he replied that he had tramped the mountains for years, but had never carried one. I was amazed, but the condition confronting us permitted no compromise. I told him therefore that altho he had frequently slept on the ground without covering in summer when many years younger, he was too old to do so now, particularly at this late season of the year. I told him also that I had a good sleeping-bag, just big enough for one, with no extra blankets for two, and farther that it was out of the question for me to set out on such a trip with a companion who had no bed. This led to my ultimatum, which was: "Get a bed or go back home." Recognizing the justice of my argument he compromised by asking: "V/here can I buy a bed in the mountains?" This problem was soon solved and the trip was carried out as had been planned. It may be added that altho my ground canvas was a large one and did duty for us both, as we slept close together, yet the severity of the weather was such that he suffered nearly every night from cold. He made no complaint, but v/as always up and. had a