Home > All Reminiscences of John Muir > 23 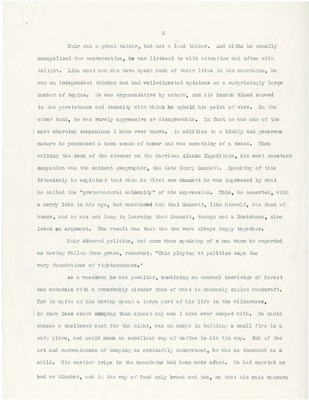 Muir was a great talker, but not a loud talker. And altho he usually monopolized the conversation, he was listened to with attention and often with delight. Like most men who have spent much of their lives in the mountains, he was an independent thinker and had well-digested opinions on a surprisingly large number of topics. He was argumentative by nature, and his Scotch blood showed in the persistence and tenacity with which he upheld his point of view. On the other hand, he was rarely aggressive or disagreeable. In fact he was one of the I most charming companions I have ever known. In addition to a kindly and generous nature he possessed a keen sense of humor and v/as something of a tease. When walking the deck of the steamer on the Harriman Alaska Expedition, his most constant companion was the eminent geographer, the late Henry Gannett. Speaking of this friendship he explained that when he first saw Gannett he was impressed by what he called the "preternatural solemnity" of his expression. This, he asserted, with a merry look in his eye, had convinced him that Gannett, like himself, was fond of humor, and he was not long in learning that Gannett, though not a Scotchman, also loved an argument. The result was that the two were always happy together. Muir abhored politics, and once when speaking of a man whom he regarded as having fallen from grace, remarked; "This playing at politics saps the very foundations of righteousness," As a woodsman he was peculiar, combining an unusual knowledge of forest and mountain with a remarkably slender fund of what is commonly called woodcraft. For in spite of his having spent a large part of his life in the wilderness, he knew less about camping than almost any man I have ever camped with. He could choose a sheltered spot for the night, v/as an adept in building a small fire in a safe place, and could make an excellent cup of coffee in his tin cup. But of the art and conveniences of camping as ordinarily understood, he was as innocent as a child. His earlier trips in the mountains had been made afoot. He had carried no bed or blanket, and in the way of food only bread and tea, so that his main concern