Home > All Reminiscences of John Muir > 22 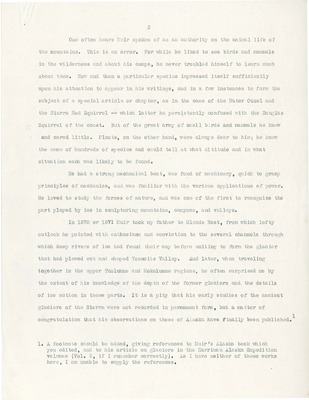 2 One often hears Muir spoken of as an authority on the animal life of the mountains. This is an error. For while he liked to see birds and mammals in the wilderness and about his camps, he never troubled himself to learn much about them, low and then a particular species impressed itself sufficiently upon his attention to appear in his writings, and in a few instances to form the subject of a special article or chapter, as in the case of the Water Ouzel and the Sierra Red Squirrel — which latter he persistently confused with the Douglas Squirrel of the coast. But of the great army of small birds and mammals he knew and cared little. Plants, on the other hand, were always dear to him; he knew the name of hundreds of species and could tell at what altitude and in what situation each was likely to be found. He had a strong mechanical bent, was fond of machinery, quick to grasp principles of mechanics, and was familiar with the various applications of power. He loved to study the forces of nature, and was one of the first to recognize the part played by ice in sculpturing mountains, canyons, and valleys. In 1870 or 1871 Muir took my father to Clouds Rest, from which lofty outlook he pointed with enthusiasm and. conviction to the several channels through which deep rivers of ice had found their way before uniting to form the glacier that had plowed out and shaped Yosemite Valley. And later, when traveling together in the upper Tuolumne and Mokelumne regions, he often surprised me by the extent of his knowledge of the depth of the former glaciers and the details of ice action in those parts. It is a pity that his early studies of the ancient glaciers of the Sierra, were not recorded in permanent form, but a matter of congratulation that his observations on those of Alaska have finally been published. 1. A footnote should be added, giving references to Muir's Alaska, book which you edited, and to his article on glaciers in the Harriman Alaska Expedition volumes (Vol. 2, if I remember correctly). As I have neither of these works here, I am unable to supply the references.