Home > All Reminiscences of John Muir > 21 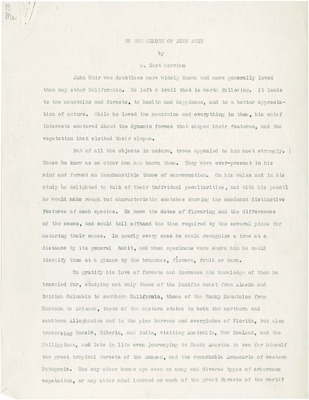 TO THE MEMORY OF JOHN MUIR by C. Hart Merriam John Huir was doubtless more widely known and more generally loved than any other Oalifornian. He left a trail that is worth foHaving. It leads to the mountains and forests, to health and happiness, and to a better appreciation of nature, while he loved the mountains and everything in them, his. chief interests centered about the dynamic forces that shaped their features, and the vegetation that clothed their slopes. But of all the objects in nature, trees appealed to him most strongly. These he knew as no other man has known them. They were ever-present in his mind and formed an inexhaustible theme of conversation. On his walks and in his study he delighted to talk of their individual peculiarities, and with his pencil he would make rough but characteristic sketches showing the dominant distinctive features of each species. He knew the dates of flowering and the differences of the sexes, and could tell offhand the time required by the several pines for maturing their cones. In nearly every case he could recognize a tree at a distance by its general habit, and when specimens were shown him he could identify them at a glance by the branches, flowers, fruit or bark. To gratify his love of forests and increase his knowledge of them he traveled far, studying not only those of the Pacific coast from Alaska and British Columbia to southern California, those of the Rocky Mountains from Montana to Arizona, those of the eastern states in both the northern and southern Alleghanies and in the pine barrens and everglades of Florida., but also traversing "Russia, Siberia, and India, visiting Australia, New Zealand, and the Philippines, and. late in life even journeying to South America to see for himself the great tropical forests of the Amazon, and the remarkable Araucaria of western Patagonia, Has any other human eye seen so many and diverse types of arboreous vegetation, or any other mind learned so much of the great forests of the world?