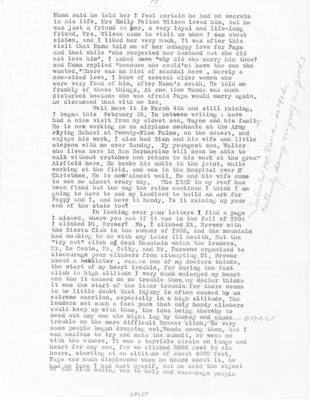 /y Mama said he told her I feel certain he had no secrets in his life. Mrs Emily Pelton Wilson loved him, but he was just a friend to j^er, a very loyal and life-long friend. Mrs. Wilson came to visit us v/hen I was about sixten, and I liked her very much. It was after this visit that Mama told me of her unhappy love for Papa and that while "she respected her husband out she did not love him". I asked then "why did she marry him then? and Mama replied "beca,use she could'nt have the one she wanted."There was no hint of scandal here , merely a one-sided love,- I know of several older woraen who were very fond of him, after Mama's death. He told me frankly of these things. At one time 7/anda was much disturbed because she was afraid Papa would marry again. He discussed that with me too. Well here it is March 4th and still raining, I began this February 26. In between writing I have had a nice visit from ray eldest son, Wayne and his famil He is now working as an airplane mechanic at the Army flying School at Twenty-Nine Palms, on the desert, and enjoys his work. I also had Stan and his wife and little stepson with me over Sunday, My youngest son, Walter who lives here in San Bernardino will soon be able to walk without crutches and return to his work at the great- Airfield here. He broke his ankle in the joint, while working at the field, and was in the hospital over & Christmas. He is no-iKalmost well. He and his wife come to see me almost every day. The LEAK in my roof has been fixed but the way the rains continue I think I am . j going to have to ask my landlord to build, an ark for Poppy and I, and have it handy. Is it raining up your end of the state too? In looking over your letters I find a page / I missed, where you ask if it was in the fall of 1904 I climbed Mt. Brewer? No, I climbed Mt. Brewer with the Sierra Club in the summer of 1902, and the mountain had nothing to do with any later ill health. But the "try out" climb o£ Goat Mountain which'the leaders, Mr. Le Conte, Mr, Colby, and Mr. Pearsons organized to discourage poor climbers from attempting Mt. Brewer about a wekklater , was, as one of my doctors thinks, the start of my heart trouble, for during the fast climb in high altitude I very much enlarged my heart and tho it caused me no trouble then, my doctor thinks it was the start of the later trouble, for there seems to be little doubt that injury is often caused bji an extreme exertion, especially in a high altitude. The leaders set such a fast pace that only hardy climbers could keep up with them, the idea being thereby to weed out any one who might lag by theway and cause <