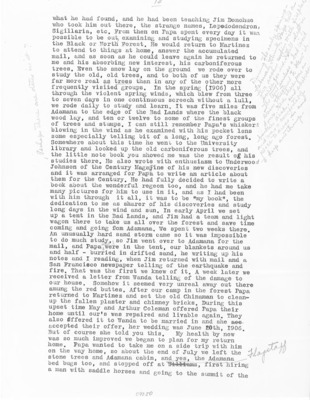 l# I Sigillaria, etc. From then on Papa spent every day it wax possible to toe out, examining and studying specimens in the Black to attend mail, and would or Forth Forest. He to things at home as soon as he me and his absorbing trees. Even tho snow study the old, old trees, and to tooth far more real as trees than in any of return to Martinez , answer the accumulated could leave again he returned new interest, his carboniferous lay on the ground we rode over to of us they were the other more to frequently visited groups, through the violent spring In the spring (1906) all winds, which tolew from three to seven days in one continuous screech without a lull, we rode daily to study and learn. It was five miles from Adamana to the edge of the Bad Lands where the black wood lay, and ten or twelve to some of the finest groups of trees and stumps. I can still remember Papa's whiskers blowing in the wind as he examined with his pocket lens some especially telling bit of a long, long ago forest. Somewhere atoout this time he went to the University library and looked up the old carboniferous trees, and the little note book you showed me was the result og his studies there. He also wrote with enthusiasm to Underwood Johnson of the Century Magajlne of his new discoveries and it was arranged for Papa to write an article about them for the Century, He had fully decided to write a book atoout the wonderful regeon too, and he had me take many pictures for him to use in it, and as I had "been with him through it all, it was to toe "my "book", the dedication to me as sharer of his discoveries and study long days in the wind and sun. In early April we set up a tent in the Bad Lands, and Jim had a team and light wagon there to take us all over the forest and save time coming and going fom Adamana, We spent two weeks there. An unusually hard sand storm came so it was impossible to do much study, so Jim went over to Adamana for the mail, and Papa'1,'we're in the tent, our blankets around us and half - hurried in drifted sand, he writing up his notes and I reading, when Jim returned with mail and a San Francisco newspaper telling of the earthquake and fire. That was. the first we knew of it. A week later we received a letter from Wanda telling of the damage to our house. Somehow it seemed very unreal away out there amung the red buttes. After our camp in the forest Papa returned to Martinez and set the old Chinaman to cleanup the fallen plaster and chimney bricks. During this upset time May and Arthur Coleman offered Papa their home until our's was repaired and livable again. They also Offered it to Wanda to be married in and she aee= accepted their offer, her wedding was June 25th, 1906, But of course she told you this. My health by now was so much improved we began to plan for my return home. Papa wanted to take me on a side trip with him on the way home, so about the end of July we left the stone trees and Adamana cabin, and yes, the Adamana, bed bugs too, and stopped off at '^*44#ams, first hiring a ' W man with saddle horses and going to the summit of the onro