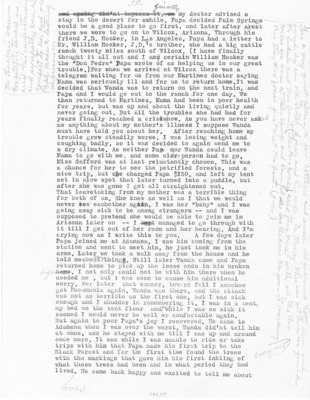 stay in the desert for awhile. 7 'my doctor ahvised a Papa decided Palm Springs ,: • would toe a good place to go first, and later after airest there we were to go on to Wilcox, Arizona. Then a very quiet place, a few cottages and small old fashioned hotel run and owned by an old Scotch [ ] and his wife, Dr. Murry. When we got there we found Mr. [Lukeus] and Mrs. Gant (then Mrs. Jones), and they were with us the three weeks we were at Palm Springs and camped [ ] San Andreas Canyon. It was during this stay Mrs. Jones just met Mr. Gant. (over) Through his friend J.D. Hooker, in Los Angeles, Papa had a letter to Mr. William Hooker, J.D. 's "brother, who had a "big cattle ranch twenty miles south of Wilcox, (I have finally thought it all out and I amc1 certain William Hooker was the "Don Pedro" Papa wrote of as helping us in our great trouble.) Mr. Hooker’s warm hospitality towards us and his understanding and sympathy were a comfort to us, and on Papa made a lasting impression. For when we arrived at Wilcox there was a telegram waiting for us from our Martinez doctor saying Mama was seriously ill and for us to return home,It was decided that Wanda was to return on the next train, and Papa and I would go out to the ranch\for one day. We then returned to Martinez. Mama had been in poor health for years, tout was up and about tho living quietly and never going out. But all the troubles she had had for years finally reached a crisisnow. As you have never ask me anything atoout my mother's illness I suppose Wanda must have told you atoout her. After reaching home my trouble grew steadily worse, I was losing weight and coughing toadly, so it was decided to again send me to a dry climate. As neither Pap nor Wanda could leave Mama to go with me, and some olerrperson had to go, Miss Safford was at last reluctantly chosen. This was a chance for her to see the petrified forests, and a nice trip, tout sjjie charged Papa $150. and left my tent set in alow spot that later turned into a puddle, tout after she was gone I got all straightened out. That leavetaking from my mother was a territole thing for tooth of us. She knew as well as I that we would never see eachother again, I was her "toatoy" and I was going away sick to toe among strangers -- and I was supposed to pretend she would be able to join me in Arizona later on -- I leejstt managed to go through with it till I got out of her room and her hearing. And I'm crying now as I write this to you. A few days later Papa joined me at Adamana. I saw him coming from the station and went to meet him, he just took me in his arms. Later we took a walk away from the house and he told meatoouwthlngi. Still later Wanda came and Papa returned home to pick up tho loose ends in his broken hatjBB-. I not only could not toe with him there when he needed me , tout l was soon to cause him additional worry. For later that summer, tow;rd fall I somehow ot Pneumonia again. Wanda was there, and the. attack territole as the first one, but I was sick was in a tent. was not as enough and I shudder in remembering it, I my toed on the tent floor andj'rwnile I was so sick it seemed I would never toe well or comfortable again. But again to poor Papa's joy I recovered. He came to Adamana when I was over the worst, Wanda did'nt tell him at once, and he stayed with me till I was up and around once more. It was while I was unable to ride or take trips with him that Papa made his first trip to the Black Forest and for the first time found the trees with the markings that gave him his first inkling of what these trees had "been and in what period they had 1 ived. He came 'back happy and excited to tell 31 ^ ? *£ me atoout 4^ on r