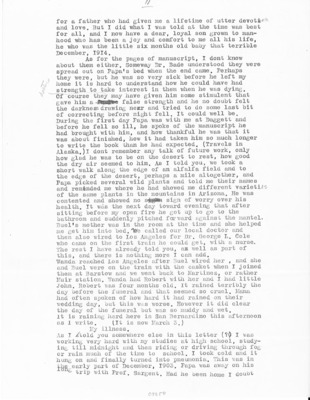 // for a father who had given me a lifetime of utter devotaK and love. But I did what I was told at the time was "best for all, and I now have a dear, loyal son grown to manhood who has been a joy and comfort to me all his life, he who was the little six months old baby that terrible December, 1914. As for the pages of manuscript, I dont know atoout them either. Someway Dr. Bade understood they were spread out on Papa's bed when the end came. Perhaps they were, tout he was so very sick 'before he left my home it is hard to understand how he could have had strength to take interest in them when he was dying. Of course they may Imve given him some stimulent that gave him a J^aa^e false strength and he no doutot felt the darkness drawing nesr and tried to do some last toit of correcting "before night fell. It could well toe. During the first day Papa.was with me at Daggett and "before he fell so ill, he spoke of the manuscript he had "brought with him, and how thankful he was that it was atoout finished, how it had taken him so much longer to write the "book than he had expected. (Travels in Alaska.) I dont remem'ber any talk of future work, only how glad he was to toe on the desert to rest, how good the dry air seemed to him. As I told you, we took a short walk along the edge of an alfalfa field and to the edge of the desert, perhaps a mile altogether, and Papa picked several wild plants and told me their names and reminded me where he had showed me different varieti./^ of the same plants in the mountains in Arizona. He was contented and showed no s^^te sign of worry over his health. It was the next day toward evening that after sitting 'before my open fire he got up to go to the "bathroom and suddenly pitched forward against the mantel. Duel's mother was in the room at the time and she helped me get him into toed.^e called our local doctor and then also wired to Los Angeles for Dr. George I,. Cole who came on the first train he could get, with a nurse. The rest I have already told you, as well as part of this, and trie re is nothing more I can o.dd. Wanda reached Los Angeles after Buel wired her , and she and Buel were on the train with the casket when I joined them at Barstow and we went back to Martinez, or rather Muir station. Wanda had Robert with her and I had little John. Robert was four months old. It rained terribly the day "before the funeral and that seemed so cruel. Mama had often spoken of how hard it had rained on their wedding day, but this was worse. However it did clear the day of the funeral but was so muddy and wet. It is raining hard here in San Bernardino this afternoon as I write. (it is now March 3.) My illness, .As I /told you somewhere else in this letter (?<) I was working very hard with my studies at high school, studying till midnight and then riding or driving through fog or rain much of the time to school. I took cold and it hung on and finally turned into pneumonia. This was in early part of December, 1903. Papa was away on his trip with Prof. Sargent. Had lie seen home I doubt 09Z t ° M ong