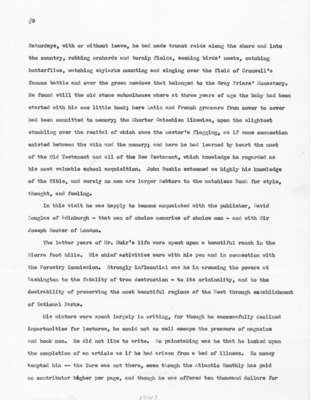 rW Saturdays, with or without leave, he had nade truant raids along the shore and into the country, robbing orchard* and turnip fields, seeking birds' nests, catching butterflies, watching skylarks mounting and singing over the field of Crorawell's famous battle and over the green meadows that belonged to the Gray Friars' ilonastery. Be found still the old stone schoolhouse where at three years of age the baby had been started with his one little book; h&ra Latin and French grammars from cover to cover had been committed to memory; the Shorter Catechise likewise, upon the slightest stumbling ov^r the recital of which ea«e the master's flogging, as if sosie connection existed between the skin and the memory; and here he had learned by heart the *iost of the Old Testament and all of the New Testament, which knowledge he regarded as his most valuable school acquisition. John fiuskin esteemed as highly his knowledge of the Bible, and surely no men are larger debtors to the irotchless Book for style, thought, and feeling. In this visit he was happiy to beooae acquainted with the publisher, i^avid Douglas of Edinburgh - that mm of choice memories of choice men - and with Sir Joseph Hooker of London. The latter years of *fr. Iluir's life were spent upon a beautiful ranch In the Sierra foot hills. His ohief activities were with his pen and in connection with tho Forestry Commission. Strongly influential was he in arousing the powers at Washington to the fatality of tree destruction - to its criminality, and to the desirability of preserving the j?iost beautiful regions of the »est through establishment of Rational Parks* His winters were spent largely in writing, for though he successfully declined importunities for lectures, he could not so well escape the. pressure of Magnain© and book men. He did not like to write. 36 painstaking was he that he looked upon the completion of an article as if he had arisen from a bed of illness. Ho money tempted him — the lure was not there, even though the Atlantic Monthly has paid no contributor hfcgher per page, and though he was offered ten thousand dollars for 690£3