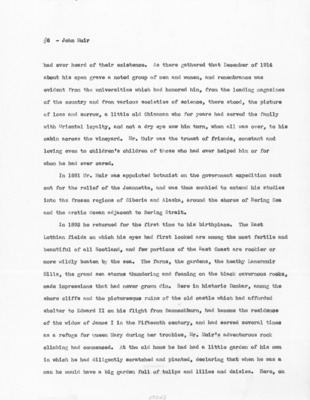 f8 «* John Kuir had ever heard of their existence. As there gathered that Feceraber of 1914 about his open grave a noted groi*p of men and woaen, and remembrance was evident from the universities which had honored him, from the leading raagagines of the country and from, various societies of science, there stood, the picture of loss and sorrow, a little old Chinaman who for yemrti had served the family with Oriental loyalty, and not a dry ©ye saw hin turn, when all was over, to his cabin across the vineyard. Mr. Muir was the truest of friends, constant and loving even to children's children of those who had ever helped him or for whon he had ever cared. In 1881 -*fr, Muir was appointed botanist on the government expedition sent out for the relief of the Jeannette, arid was thus enabled to extend his studies into the frozen regions of Siberia and Alaska, around the shores of Bering oca and the Arctic ocean adjacent to Bering Strait* In 1893 he returned for the first time to his birthplace. The East Lothian fields on which his eyes had first looked are among the most fertile and beautiful of all Scotland, and few portions of the hast Coast are rockier or wore wildly beaten by the sea. The farms, the gardens, the heathy Lamemuir Hills, the grand sea storms thundering and foaming on the black cavernous rooks, asde Impressions that had n&v&r grown dim. Here in historic Dunbar, among the shore cliffs and the picturesque ruins of the old castle which had afforded shelter to Edward II on his flight from Bannockburn, had become the residence of the widow of James I in the Fifteenth century, and had served several times as a refuge for vueen Mary during her troubles, Ur. Muir's adventurous rock climbing had commenced. At the old hoiae he had had a little garden of Ms own in which he had diligently scratched and planted, declaring that when he was a man he would have a big garden full of tulips and lilies and daisies. Here, on afoas