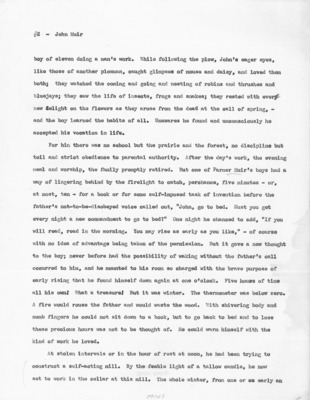 #2 - John Muir boy of eleven doing a man's work. While following the plow, John's eager eyes, like those of another plowann, caught glimpses of saouse and daisy, and loved them both; they watched the coming and going and nesting of robins and thrushes and bluejaysj they saw the life of insects, frogs and snakes; they rested with everg^'- new 2elight on the flowers as they arose frois the dead at the call of spring, - and the boy learned the habits of all. Vnawares he found and unconsciously he accepted his vocation in life. For bin there was no school but the prairie and th*s forest, no discipline but toil and strict obedience to parental authority. After the day's work, the evening weal and worship, the f&raily promptly retired. But one of Faraer IJuir's boys had a way of lingering behind by the firelight to catch, perchance, five minutes - or, at most, ten - for a book or for sose self-imposed task of invention before the father's not-to-be-uisobeyed voice called out, "John, go to bed. Must you get &v®ry night a new conanandjaent to go to bed?" One night he chanced to add, "if you will read, read in the morning. You may rise as early as you like," •» of course with no idea of advantage being taken of the permission. But it gave a new thought to the boy; nev®r before had the possibility of waking without the father's call occurred to him, and he mounted to his room so charged with the brave purpose of early rising that he found himself down again at one o'clock. Five houes of time nil his own! What a treasure! But it was winter. The thermometer was below zero. A fire 'would rouse the father s,nd would waste the wood. *vxth shivering body and numb fingers he could not sit down to a book, but to go back to bed and to lose these precious hours was not to be thought of, he could warm himself with the kind of work he loved. At stolen intervals or in the hour of rest at noon, he had been trying to construct a self-acting mill. By the feeble light of a tallow candle, he now set to work in the cellar at this mill. The whole winter, from one or «ft early an