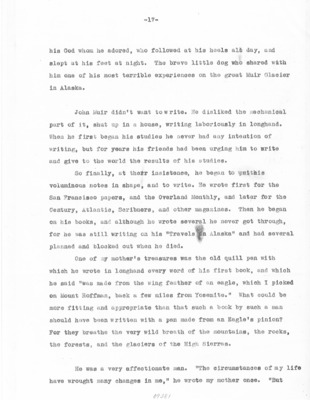 •17* his God whom lie adored, who followed at his heels all day, and slept at his feet at night, Tho brave little dog who shared with him one of his most terrible experiences on the great Muir Glacier in Alaska, John .wuir didn't want to write. He disliked the nechanical part of it.9 shut up in a house, writing laboriously in longhand, When ha first began his studies at never bad any intention of writing, but for years his friends had been urging him to write and give to the world the results of his studies. So finally, at thefr insistence, he began to vpnithis voluminous notes la shape, and to write. He wrote first for the San Francisco papers, and the Overland Monthly, and later for the Century, Atlantic, Scribuers, axid other magazines* Then he began on his books, anci although he wrote several he never got through, for he was still writing on his "TravelsWh Alaska" and had several planned and, blocked out when he died* One of my mother's treasures was the old quill pen with which ho wrote la longhand every word of his first book, and which he said "was made from the wing feather of an eagle, which I picked on Mount Hoffman, back a few miles from Yosemite." What could be more fitting and appropriate than that such a book by such a man should have been written with a pen made from an Eagle's pinion? For they breathe the very wild breath of the mountains, the rocks, the forests, and the glaciers of the High Sierras. He was a very affectionate man. "The circumstances of my life have wrought many changes in me," he wrote my mother once. "But ,'