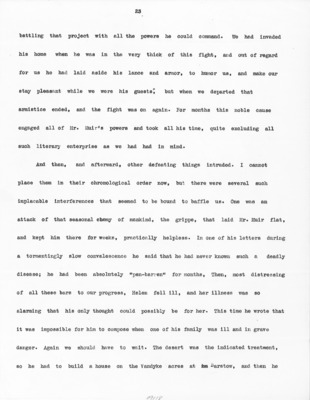 23 battling that project with all the powers he could command. We had invaded his home when he was in the very thick of this fight, and out of regard for us he had laid aside his lance and armor, to humor us, and make our stay pleasant while we were his guests^ but when we departed that armistice ended, and the fight was on again. For months this noble cause engaged all of Mr. Muir's powers and took all his time, quite excluding all such literary enterprise as we had had in mind. And then, and afterward, other defeating things intruded. I cannot place them in their chronological order now, but there were several such implacable interferences that seemed to be bound to baffle us. One was an attack of that seasonal enemy of mankind, the grippe, that laid Mr* Muir flat, and kept him there for weeks, practically helpless. In one of his letters during a tormentingly slow convalescenee he said that he had never known such a deadly disease; he had been absolutely "pen-barren" for months, Them, most distressing of all these bars to our progress, Helen fell ill, and her illness was so alarming that his only thought could possibly be for her. This time he wrote that it was impossible for him to compose when one of his family was ill and in grave danger. Again we should have to wait. The desert was the indicated treatment, so he had to build a house on the Vandyke acres at mm -^arstow, and then he J?//?