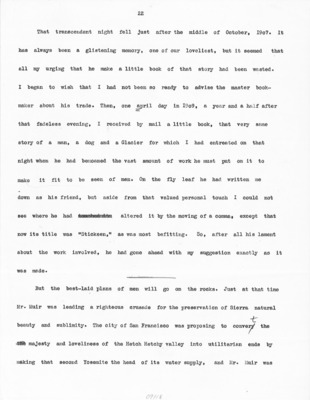 22 That transcendent night fell just after the middle of October, I9o7. It has always been a glistening memory, one of our loveliest, but it seemed that all my urging that he make a little book of that story had been wasted. I began to wish that I had not been so ready to advise the master bookmaker about his trade. Then, one april day in I9o9, a year and a half after -. "-' that fadeless evening, I received by mail a little book, that very same story of a man, a dog and a Glacier for which I had entreated on that night when he had bemoaned the vast amount of work he must put on it to make it fit to be seen of men. On the fly leaf he had written me down as his friend, but aside from that valued personal toxich I could not see where he had lbDaammsiSmdirbm altered it by the moving of a comma, except that now its title was "Stiekeen," as was most befitting. So, after all his lament about the work involved, he had gone ahead with ray suggestion exactly as it was made. But the best-laid plans of men will go on the rocks. Just at that time Mr. Muir was leading a righteous crusade for the preservation of Sierra natural beauty and sublimity. The city of San Francisco was proposing to converV the <*S& majesty and loveliness of the Hetch Hetchy valley into utilitarian ends by making that second Yosemite the head of its water supply, and Mr. Muir was 0?//e