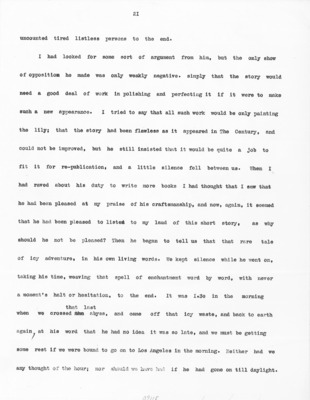 21 uncounted tired listless persons to the end. I had looked for some sort of argument from him, but the only shov; of opposition he made was only weakly negative, simply that the story would need a good deal of ?/ork in polishing and perfecting it if it were to make such a new appearance. I tried to say that all such work would be only painting the lily; that the story had been flawless as it appeared in The Century, and could not be improved, but he still insisted that it would be quite a job to fit it for re-publication, and a little silence fell between us. When I had raved about his duty to write more books I had thought that I saw that he had been pleased at my praise of his craftsmanship, and now, again, it seemed that he had been pleased to listed to my laud of this short story, as why should he not be pleased? Then he began to tell us that that rare tale of icy adventure, in his own living words. We kept silence while he went on, taking his time, weaving that spell of enchantment word by word, with never a moment's halt or hesitation, to the end. It v/as I*3o in the morning that last when we crossed mm© abyss, and came off that icy waste, and back to earth again at his word that he had no idea it was so late, and we must be getting some rest if we were bound to go on to Los Angeles in the morning. Neither had we any thought of the hour; nor should we have had if he had gone on till daylight. 09//tr