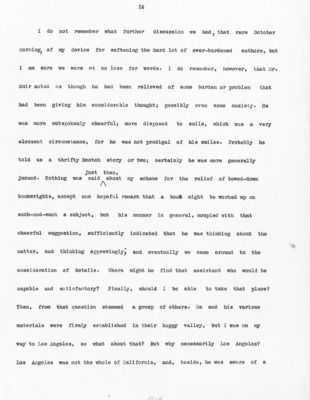 16 I do not remember what further discussion we had. that rare October morning of my device for softening the hard lot of over-burdened authors, but I am sure we were at no loss for words. I do remember, however, that Mr. Muir acted as though he had been relieved of some burden or problem that had been giving him considerable thought; possibly even some anxiety. He was more outspokenly cheerful; more disposed to smile, which was a very eloquent circumstance, for he was not prodigal of his smiles. Probably he told us a thrifty Scotch story or two; certainly he was more generally just then, jocund. Nothing was said about my scheme for the relief of bowed-down A bookwrights, except one hopeful remark that a booft might be worked up on such-and-such a subject, but his manner in general, coupled with that cheerful suggestion, sufficiently indicated that he was thinking about the matter, and thinking approvinglyJ and eventually we came around to the consideration of details. Where might he find that assistant who would be capable and satisfactory? Finally, should I be able to take that place? Then, from that question stemmed a group of others. He and his various materials were firmly established in their happy valley, but I was on ray way to Los Angeles, so what about that? But why necessarily Los Angeles? Los Angeles was not the whole of California, and, beside, he was aware of a :!>..' < /,