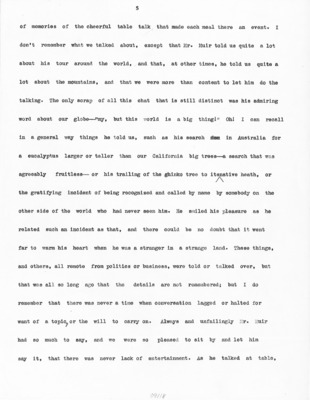 of memories of the cheerful table talk that made each meal there an event. I don't remember what we talked about, except that Mr. Muir told us quite a lot about his tour around the world, and that, at other times, he told us quite a lot about the mountains, and that we were more than content to let him do the talking. The only scrap of all this chat that is still distinct was his admiring word about our globe—"my, but this world is a big thing!li Ohl I can recall in a general way things he told us, such as his search iSma in Australia for a euoalyptus larger or taller than our California big trees—a search that was agreeably fruitless— or his trailing of the ghinko tree to itsnative heath, or the gratifying incident of being recognized and called by name by somebody on the other side of the world who had never seen him. He smiled his pleasure as he related such an incident as that, and there could be no doubt that it went far to warm his heart when he was a stranger in a strange land. These things, and others, all remote from politics or business, were told or talked over, but that was all so long ago that the details are not remembered; but I do remember that there was never a time when conversation lagged or halted for want of a topiCLor the will to carry on. Always and unfailingly Mr. Muir had so much to say, and we were so pleased to sit by and let him say it, that there was never lack of entertainment. As he talked at table, 09//f