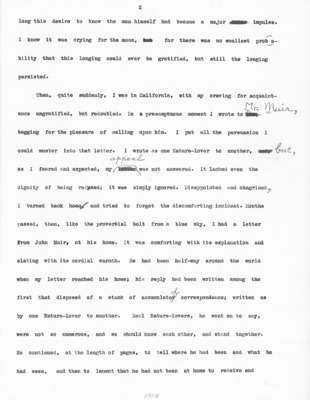 long this desire to know the man himself had become a major dMM*- impulse. I knew it was crying for the moon, mam for there was no smallest prob a- bility that this longing could ever be gratified, but still the longing persisted. Then, quite suddenly, I was in California, with my craving for acquaint- tfr. WUU_, ance ungratified, but redoubled. In a presumptuous moment I wrote to Ml- begging for the pleasure of calling upon him. I put all the persuasion I could muster into that letter. I wrote as one Hature-lover to another, aMrip' \^uK, « as I feared and expected, ray /W&Eib&^was not ansv/ered. It lacked even the dignity of being refjised; it was simply ignored. Disappointed and chagrined5 I turned back homo^'and tried to forget the discomforting incident. Months passed, then, like the proverbial bolt from a blue sky, I had a letter Jfrom John Muir, at his home. It was comforting with its explanation and elating with its cordial warmth. He had been half-way around the world when my letter reached his home; his reply had been written among the first that disposed of a stack of accuraulate/ir correspondence; v/ritten as by one ITature-lover to another. Real Eature-lovers, he went on to say, were not so numerous, and so should know each other, and stand together. He continued, at the length of pages, to tell where he had been and what he had seen, and then to lament that he had not been at home to receive and of//r