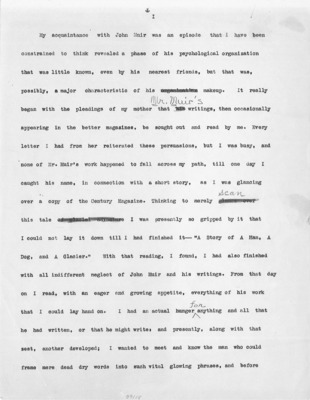 I My acquaintance with John Mttir was an episode that I have been constrained to think revealed a phase of his psychological organization that was little known, even by his nearest friends, but that was, possibly, a major characteristic of his rmsgmsaAmmiiaismi makeup. It really began with the pleadings of my mother that /MS writings, then occasionally appearing in the better magazines, be sought out and read by me* Every letter I had from her reiterated these persuasions, but I was busy, and none of Mr» Muir's work happened to fall across my path, till one day I caught his name, in connection with a short story, as I was glancing over a copy of the Century Magazine. Thinking to merely this tale o.j^j(||W^a!WWW8Stefere I was presently so gripped by it that I could not lay it down till I had finished it— "A Story of A Man, A Dog, and A Glacier." With that reading, I found, I had also finished with all indifferent neglect of John Muir and his writings. From that day on I read, with an eager and growing appetite, everything of his work ib/f_ that I could lay hand on. I had an actual hunger anything and all that he had written, or that he might write* and presently, along with that zest, another developed; I wanted to meet and know the man who could frame mere dead dry words into such vital glowing phrases, and before 09/^r