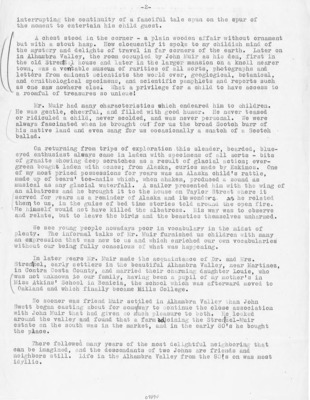 interrupting the continuity of a fanciful tale spun on the spur of the moment to entertain his child guest. A chest stood in the corner - a plain wooden affair without ornament but with a stout hasp. How eloquently it spole to my childish mind of the mystery and delights of travel in far corners of the earth, later on in Alhambra Valley, the room occupied by John Muir as his den, first in the old Strer$Ml house and later in the larger mansion on a knoll nearer town, was a ventable museum of rarities of all sorts, photographs and letters from eminent scientists the world over, geoglogical, botanical, and ornithological specimens, and scientific pamphlets and reports such as one saw nowhere elsel What a privilege for a child to have access to a roomful of treasures so unique! Mr. Muir had many characteristics which endeared him to children. He was gentle, cheerful, and filled with good humor. He never teased or ridiculed a child, never scolded, and was never personal. He were always fascinated when he brought out. for us the broad Scotch burr of his native land and even sang for us occasionally a snatch of a Scotch - ballad. On returning from trips of exploration this slender, bearded, blue- eyed enthusiast always came in laden with specimens of all sorts - bits of granite showing deep scratches as a result of glacial action; evergreen bough* laden with cones; from Alaska, curios made by. Eskimos,. One of my most prized possessions for years was an Alaska child's rattle, made up of bears' toe-nails which, when shaken, produced a sound as musical as any glacial waterfall. A sailor presented him with the wing of an albatross and he brought it to the house on Taylor Street where it served for years as a reminder of Alaska and its wonders- ^s he related then) to us, in the guise of bed time stories told around the open fire. He himself would not have killed the albatross. His way was to observe and relate, but to leave the birds and the beasties themselves unharmed. He see young people nowadays poor in vocabulary in the midst of plenty. The informal talks of Mr. Muir furnished us children with many an expression that was new to us and which enriched our own vocabularies' without our being fully conscious of what was happening. In later vears Mr. Fair made the acquaintance of .Dr. and Mrs. Strehfcel, early settlers in the beautiful Alhambra Valley, near Martinez, in Contra Costa County, and married their charming daughter Louie, who fwas not unknown, .to our family, having been a pupil of my mother's in (Miss Atkins' School in Benicia, the school which was afterward moved to V Oakland and which finally became Mills College. Ho sooner was friend Muir settled in .Alhambra Valley bhan John Swett began casting about for somepay to continue the close association with John Muir that had given so much pleasure to both, lie looked around the valley and found that a farm joining the Streafzel-Huir estate on the south was in the market, and in the early SO's he bought the place. There followed many years of the most delightful neighboring that can be imagined, and the descendants of two Johns are friends and neighbors still, life in the Alhambra Valley from the SO(s on was most .idyllic. oW