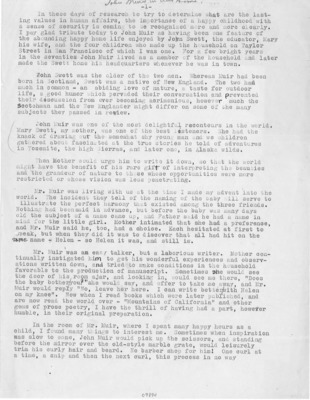 John Muir in Our House. In these days of research to try to determine what are the lasting values in human affairs, the importance of a happy childhood with a sense of security is doming to be recognized more and more clearly* I pay glad tribute today to John Muir as having been one feature of the abounding happy home life enjoyed by Jo|m Swett, the educator, Mary his wife, and the four children who made up the household on 1'aylor Street in San Francisco of which I was one. For a few bright years in the seventies John Muir lived as a member of the household ;.^nA later made the Swetb home his headquarters whenever he was in town. Hohn Swett was the cider of the two men. Whereas Muir had been born in Jcotland, Swett was a native of Hew England. The two had much in common - an abiding iove of nature, a taste for outdoor life, a good humor which pervaded their conversation and prevented their discussion from ever becoming acrimonious, however, much the Scotchman and the Hew Englander might differ on some of the many subjects they passed in review. John Muir was one of the most delightful raconteurs in the world. Mary Swett, my mother, was one of the best listeners* She had the knack of drawing out" the somewhat shy young man and we children gathered about, fascinated at the true stories he told of adventures in Yosemlte, the high iierras, and later one, in Alaska wilds. when Mother woulu urge him to write it down, so that the world might have the benefit of his rare gift" of interpreting the beauties and the grandeur of nature to bhose whose opportunities were more restricted or rthose vision was leas penetrating. Mr. Muir was living with us at the time I made my advent into the world. the incident they tell of the naming of the oaby ..ill serve to illustrate the perfect harmony that existed among the three friends, lothing had been said in advance, but before the baby was many days old the subject of a name came up, una Father said he had a name in mind for the little girl. Mother intimated that she had a preference, and Mr. Muir said he, too, had a choice. Each hesitated at first to roeak, but when they did it was to discover that all had hit on the Ssjwe-name $ Helen - so Helen it was, and still is. Mr. Muir was am easy talker, but a laborious writer.. Mother continually instigated him to get his wonderful experiences and observations written down, and tried to make conditions in the household favorable to the production of manuscript. Sometimes ©he would see the door of his room ajar, and looking in, woulu see me there, "Does the baby bother/you?"she woulu say, and offer to take me away, and Mr. Muir would reply "No, leave her here. I can write betber/vith Helen on my knee". How when I read books which were later published, and are now read .the world over - "Mountains of California" and other gems of prose poetry, I have the thrill of having had a part, however humble, in their original preparation. In the room of Mr. Muir, where I spent many happy hours as a child, I found many things to interest me. Sometimes when inspiration ®as slow to come, John Muir would pick up the scissors, and standing before the mirror over the old-style marble grate, would leisurely trim his curly hair and beard. Ho barber shop for him! One curl at a time, a snip and then the next curl, this process in no way octri$