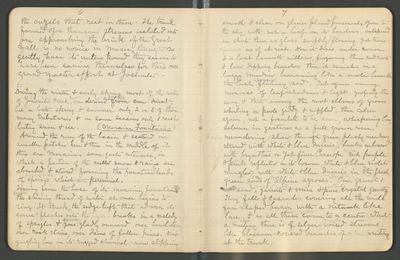 the ouzels that (nest in) haunt them. The trunk formed of a thousand streams welded into one approaching the brink of the great fall is no novice in music, though so gently have its waters poured they seem to have been saving themselves for this one grand master effort at Yosemite.

During the winter & early spring most of the waters of the basin Yosemite Creek Basin are derived [directly] from snow (direct) but in late spring & summer only 2 or 3 of those many tributaries & in some seasons only 1 reaches lasting snow & ice. (Moraine Fountains)

Around the rim of the basin & scattered in smaller patches here & there in the middle of it there are moraines some quite extensive, in which a portion of the melted snow & rains are absorbed & stored forming the fountain heads of perennial springs [which are perennial].

Issuing from the base of its moraine fountains each (the) shining thread of water at once begins to sing. [It] Threading the sedge tufts that adorn its source it flashes into the light breaks in a melody of spangles & [going] goes gladly onward over boulders, over rock stairs, over dams of fallen pines. Now gurgling low in its rugged channel; now slipping

smooth & clean on glacier planed pavements open to the sky with not a leaf on its borders, outspread in sheets thin as glass swiftly flowing yet transparent as if at rest. Now it dives under cover & is lost beneath willows, fingering their red roots & low dipping branches then (it) vanishes in a boggy meadow burrowing beneath like a mole the (lush flowery) spongy sod. Out again among mosaics of leaf-shadows & light groping this way & that (among the root elbows of groves) whirling in pools giddy & ruffled, then calm again, not a [foambell] to be seen, whispering low, solemn in gestures as a full-grown river, slowly meandering [slow] through green plushy meadows (starred with white & blue daisies), its banks embossed with [ ] bryanthus or yet finer Cassiope their rich purple & pink bells reflected in its bosom, white & blue violets mingled with white & blue daisies in [the] [a] fresh green sods of the alpine agrostis. Now it [flows] over gravel & sand mixed with garnets & mica & (pure) white crystal quartz

Tiny falls & cascades covering all the wide fan-shaped basin with a network like lace, & as all [these] their waters coming together (to a centre) (what) [to become] Yo [Yosemite] Crk [Creek] a meeting there is of silver-voiced streams like blossom-covered branches of a tree (uniting at the trunk)