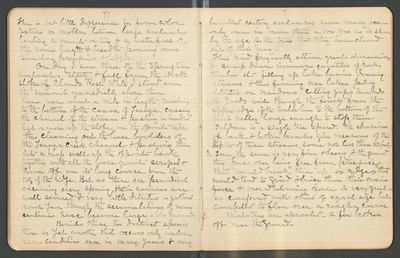 There is but little difference in form color, texture, or motion between large avalanches lasting a minute or two & a waterfall of the same length & breath pouring over similar precipices & ledges.

One day I saw three of the Springtime Avalanches start & fall from the North Slope of Clouds Rest while I stand on the summit immediately above them these were about a mile in length, reaching to the bottom of the canon of Tenaya, crossing the channel of the stream & pushing a hundred feet or more up the slope on the opposite side thus cleaning out the loose bowlders [boulders] of the Tenaya Creek Channel & pushing them into a heap well up the opposite bank together with all the loose granite scraped & worn off on its long course from the top of the ridge. But as these are periodical occurring every spring their courses are well scoured & very little detritus is gathered each year though the accumulations of many centuries have become large. like moraines

be called century avalanches since many occur only once in more than a 100 yrs [years] as is [shown] by the age of the trees that they have cleared out of their way.

This kind frequently attain great dimensions & sweep down immense quantities of rocks timber etc. filling up lake basins damming streams & thus farming new lakes, piling detritus on meadows cutting gaps hundreds of yards wide through the forests from the upper edge of the timber-line to the bottom of the first valley large enough to stop them.

Seldom is a single tree spared. The abrasions of bark & broken branches give measures of the depth of these streams, some not less than 50 feet. [In] Some the snow is very firm & heavy & the ground they pass over being free from precipices that would break them up or ridges that would tend to grind & bruise them their erosive [force] & overwhelming force is very great as compared with others of equal size but compelled to flow over a rougher course.

Most tress are uproots, a few broken off near the ground.